Hitler has only got one fishball 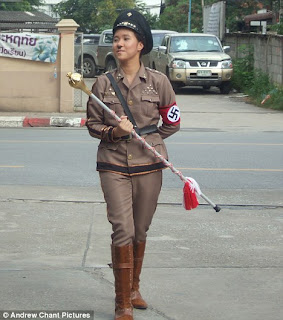 Sorry, yet another attractive-Asian-teenagers-in-swastikas story, closely following the Japanese cosplay and Thai game show tales. And we’re back in the Land of Smiles, for the tale of a Catholic school in Chiang Mai where the kids interpreted fancy dress in a manner that the present Pontiff might find a little disturbing (albeit less so in his younger days). The link, incidentally, is to the Daily Mail, in case you’re sensitive about associating with such a rag; but since we’re discussing TEENAGERS dressing as HITLER, a certain sense of proportion might be in order here.
However, if you really don’t want to go there, this gist is this. The Sacred Heart school in Chiang Mai has a tradition  of holding an elaborate fancy dress parade on sports day. This year the procession was led by a female Hitler; some students were dressed as SS guards (wielding toy guns) while others waved Nazi flags.  Many offered up an enthusiastic “sieg heil” or two. Some of the expats in attendance voiced their reservations but many of the teachers, let alone the students, simply didn’t understand why anyone might take offence.

And this is the issue. The notion of Hitler as the epitome of evil, a sort of über-bogeyman, just doesn’t resonate in most of Asia, especially with the young. Sure, they know he was one of the baddies – but just one of them. It’s not as if he’s Voldemort.

Still, at least Hitler’s Café in Mumbai has changed its name now.

PS: And some even more startling images from prachatai.com: 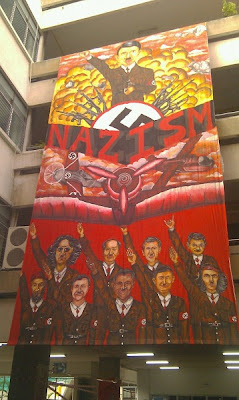 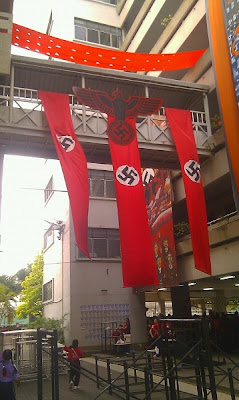 What is Hare Krsna? What are the spiritual practices and philosophy of a Hare Krsna? Who is Srila Prabhupada, the Guru of the Hare Krsna Movement? Please visit our website for more information and for new articles and pictures daily about Hare Krsna:

Possibly, Martin. But isn't it better to laugh from a position of understanding than incomprehension?

Oh dear. I appear to have been cultspammed.

Hare Krishna spam is so cool; I want some. I only ever get Viagra-pushers.