In case of emergency, break glass 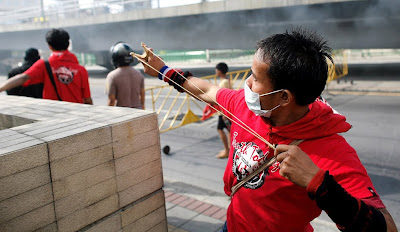 You may have noticed that I haven’t really mentioned the current unpleasantness occurring in Thailand, the part of the world where I find myself at the moment. One reason is that I don’t have much to say that might elucidate the situation; as has been said about quantum mechanics and Northern Ireland, if you understand it, you don’t really understand it. A few locals might be able to make a stab at an analysis, but a mere farang has no chance. You have to jettison so many assumptions, that you have nothing upon which to build an argument.

An example. I happened to catch sight of a TV game show yesterday. It’s called English Breakfast, and it aims to test contestants’ language skills, with a bit of general knowledge thrown into the mix. In one round, each team had to answer questions on a specific historical figure, and they were given props to make the whole experience more enjoyable. So those answering on Bruce Lee were given nunchucks; those dealing with Gandhi had glasses and curly moustaches, which actually made them look like comedy Frenchmen; and those answering on Hitler had peaked caps, swastika armbands and, again, stick-on facial hair, this time of the toothbrush variety. The host even did an amusing Nazi salute.

Now, to most westerners, this might seem bizarrely tasteless, even grotesque. But to the majority of Thais, Hitler is just another figure from the last century, and kitting oneself out in Gestapo chic is no more sinister than going to a fancy-dress ball dressed as a pirate. Which is not to say, of course, that they know no similar taboos. Several years ago, I interviewed a senior aide to then Prime Minister Thaksin Shinawatra, the man whose removal from power provoked this whole mess in the first place. I raised the issue of foreign journalists who had fallen foul of Thailand’s lèse majesté laws. He pointed out, quite reasonably, that even the most free and open countries have limits on what one can and cannot say in public, but those limits apply in different places: “I wouldn’t go to the States and start talking about race,” he said. So, Hitler’s funny, take it or leave it.

Much depends on perspective. To be a redshirt (those associated to a greater or lesser extent with Thaksin, who are campaigning for the current government to stand down) or a yellowshirt (fervent defenders of the monarchy and the socio-economic status quo) is often as much a matter of instinctive tribalism as of coherent political ideology. You read the papers, watch the TV stations, listen to the rabble-rousing speeches that best fit your own chromatic tendency.

But perspective is not just a metaphor. Here’s Thomas Fuller of the New York Times, the journalist to whom the renegade army officer Seh Daeng was talking when he was shot by an as-yet unidentified sniper:

When I sat down to write this article in my apartment, I slipped on my ballistic helmet, a piece of equipment left over from a spell covering the Iraq war that is probably more useful to me in the streets of Bangkok. I donned the helmet because my desk faces floor-to-ceiling windows with no curtains or shutters and outside is the neighborhood where protesters are battling with troops. (Gunfire erupted when I typed the word “protesters.”) I have come to view my windows as an emblem of the turmoil. The architects of this city’s gleaming apartment blocks and office towers did not anticipate gunfire. They thought about prestige and the liberating feeling of floating above a sprawling metropolis, separated only by glass. A city with floor-to-ceiling windows is a confident city. Sheets of glass, unlike the thick walls and tiny windows of centuries past, send a message: We are not worried about what lurks outside. But from my desk, it seems as if Bangkok’s architecture has outpaced its political maturity. Who in Bangkok today would feel confident behind a wall of glass when explosions rip through the night?

The thing is, although the windows of luxury apartments weren’t made to withstand bullets, they do have specific purposes that might not be immediately apparent. They let the light in, and allow the occupants to see out; but the seriously rich can afford a view that takes in the riverside temples but not the canalside slums. Effectively, the more you pay, the less you see. And almost as importantly, they block out the noise and the heat and the smell, the reality in which the bulk of the Thai population lives. It may not be coincidental that the redshirts’ weapon of choice is the humble catapult.
Posted by Tim F at 7:13 am

I'm glad you posted this because the main news channels are not very enlightening, I thought it was my fault it was hard to work out what was going on.

Is the unpleasantness easy enough for you to avoid, geographically? Is it all still contained to one part of the city or spreading?

Annie: as is usually the case, the good guys are the poor sods on the ground (on both sides); the baddies are pulling the strings (ditto).

All's well at the moment, thanks, Pleite. We're well out into the suburbs, and wouldn't have a clue that anything was amiss if it weren't for the media. One way the Thai gov't deals with problems like this is to call an impromptu public holiday and hope things calm down. Then, if it's still horrid, they call another one. We had one yesterday, and it was such a success they've extended it to the end of the week.

"the more you pay, the less you see."

Glad you are okay. It's all history in the making, of some sort.

I hope it's not history, Mrs Peel; precedent suggests that means it's doomed to be forgotten.

thank you very much