Well, it looks as if we might have some sort of Conservative government coming up, albeit one drizzled with the faintest hint of orange. 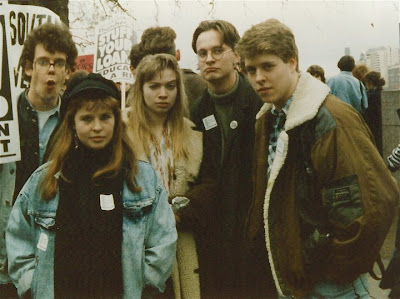 For months I’ve fretted about this prospect. But in the last few days, I’ve been coming around to the idea. You see, since 1997, I’ve been torn between loathing the Blair/Brown project and remembering that it’s, like, Labour, and they’re meant to be, y’know, the good guys.

In a bizarre way, the Thatcher years, for all the selfishness and philistinism and yuppies and the miners’ strike and the Poll Tax and Clause 28, were a time of delightful moral certainty. We were right and they were wrong. The only difference now is that the Wicked Witch has been replaced by the Slightly Camp Gammon Robot. I’m almost relishing the battle. Boots laced; badges fastened; spraycan in the inside pocket. Now, where are my fingerless gloves?

(From an idea prompted by Slaminsky. Picture by Susannah Davis, from the 1989 NUS anti-loans march.)

Ah, but this lot aren't like Thatcher's lot. These ones are *compassionate Conservatives* who will never desert the poor, the sick, the young, the elderly etc.

I look forward to seeing this compassion expressed in Dave 'n' George's first emergency budget, in which they'll be withdrawing benefits and laying off public sector workers in favour of giving perfectly viable businesses like mine a £3,000-a-year tax break.

The thought of this though... I can't bear it, not even for the sake of the moral high ground.

While I support the view that we should be looking for energy from non-carbon based sources, I reckon we could squeeze enough oil out of Cameron to keep the UK going for at least 3 years.
Anybody got a large garlic press?

Back to the good old bad old days - lots of people looking like the Thompson Twins - it rained more - was generally damp - there was more Ska. Ska aside, I don't fancy it. Especially with Annie's point.

On a tangent. I used to hang out at a peace camp back then which paid rates. (We were radical in a very polite way.) Were we the only ones?

I just noticed that is a photo of you... look at your little chuchi face...

Well at least in the 80s everyone looked happy. Oh...