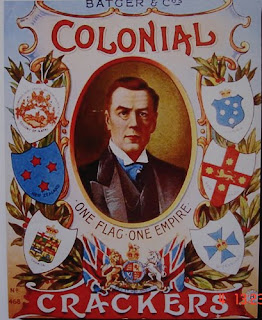 Been thinking about Joseph Chamberlain:

...In 1885 General Election Chamberlain was seen as the leader of the Radicals with his calls for land reform, housing reform and higher taxes on the rich. However, he was also a strong supporter of Imperialism, and resigned from Gladstone’s cabinet over the issue of Irish Home Rule. This action helped to bring down the Liberal government. Chamberlain now became leader of the Liberal Unionists and in 1886 he formed an alliance with the Conservative Party. As a result, the Marquess of Salisbury gave him the post of Colonial Secretary in his government. Chamberlain was therefore primarily responsible for British policy during the Boer War.

(From Spartacus Schoolnet)
Posted by Tim F at 11:13 am

I used to be expert on Chamberlain, he definitely lost it when he joined Tories. Just like Lloyd George - chamberlain being LG's role model, despite boer war disagreements