Still thinking about Malcolm McLaren’s ideas of heroic failure. Is the glory determined by the status of that which was attempted, but not attained? There’s still a faint patina of cool adhering to those (including Nick Hornby and Sebastian Faulks, if I remember correctly) who responded in vain to the NME’s “hip young gunslingers” ad; the jobs went, of course, to these two lovely creatures: 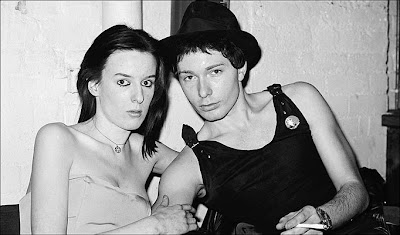 A decade and a half later, I responded to a superficially similar call-out, and auditioned to be a presenter on The Word. In this case, Katie Puckrik got the gig, while the also-rans included Davina McCall and that bloke from Teenage Health Freak. Oh yeah, and me. Somehow, I reckon McLaren would have perceived our failure to be a tad less heroic.
Posted by Tim F at 6:58 am

katie Puckrick has reinvented herself as a perfume blogger

I recognised Puckrik because she'd been in iD a few months previously, Billy. I wouldn't have known McCall from Adam at the time, and only knew she was involved when I saw some footage from the auditions about a decade later.

I know, GSE. Is it possible to fall from the dizzy heights of The Word?