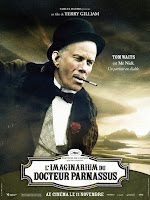 As I understand it, the reason that Avatar is a hot favourite for the Best Picture Oscar is that despite the pedestrian acting, the moronic script, the half-assed liberal gesture politics and the fact that it’s simply far too long, it looks really nice.

Fair enough. Big blue meerkat monsters clearly float many boats. But does Avatar have a sequence in which the River Styx suddenly morphs into an enormous black cobra with the head of Tom Waits? No. Well then. It’s not really the Best Picture, is it?
Posted by Tim F at 1:36 pm 7 comments:

I’m worried by Robert Dee’s attempt to sue the Daily Telegraph for identifying him as the world’s worst tennis professional. His argument seems to be based on three key points: that there is a Guatemalan player who is just as crap; that he couldn’t have been crap in 2008, because he didn’t have a world ranking then; and that what with all these people saying he’s crap, he might have trouble getting coaching work.

The last bit is the most irritating, because it suggests that nobody is allowed to say anything that might cause any inconvenience to anybody else, with the logical end point that all objective criticism is now potentially libellous. I don’t know enough about tennis to judge how crap or not Robert Dee is; but if he wins, I might just have to sue him, for depriving me of the right to make money from saying that anything is crap, whether or not it is.

PS: A parallel conversation on Facebook reminds me that this is the only way to play tennis: 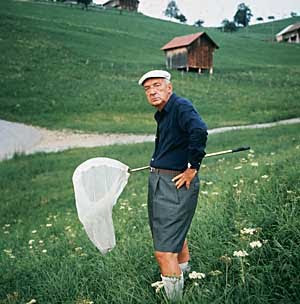 In his BookForum review of Vladimir Nabokov’s (presumably) final novel, The Origin of Laura, John Banville discusses the convoluted, controversial circumstances of the book’s appearance in the public domain, 33 years after the author’s death, and against his express wishes:

His directive was disobeyed, as such directives frequently are—one thinks of Virgil and the Aeneid and, of course, of Kafka and Max Brod.

It’s interesting to see how Banville pitches these little asides. It is assumed that we know that Virgil wrote the Aeneid, and also who Kafka and Brod were. But there’s a subtle distinction between the two, in the shape of that crucial “of course”. While Virgil comes to mind, Kafka is almost too obvious to mention.

Now, this distinction happens to fit in with the ones and zeroes of my own knowledge and ignorance. As soon as I read about Nabokov’s posthumous desires, I immediately thought of Brod, who disobeyed Kafka’s wish to have his manuscripts burned. I didn’t know about Virgil, however. (According to Wikipedia – well, why not? – he died of a fever in 19 BC, having told his executors to destroy the unfinished text.) So I think Banville gets it right, because his assumptions of understanding fit my own. But surely there are plenty of people who know the Virgil story but not the Kafka story, or know both stories, or know neither. How, in a postmodern, polycultural universe, does a writer tread the line between patronising the audience, and going over its head? And when I recently sat down to watch Tom Cruise’s prequel to Inglourious Basterds, and the caption informed me that we were in “Tunisia, North Africa”, was I right in thinking that this was a film for people who don’t know geography, and ejecting after 10 minutes?

But back to Nabokov, or more precisely to Banville. The book itself contains both reproductions of the file cards on which Nabokov wrote, and typeset versions of his text; the cards can be removed and juggled around by the reader. Banville is not convinced:

This seems dubious, for the reason that most of the cards have run-over text, and to take them out of the pages and shuffle them would make nonsense of the plot, slight and elusive though it is. And what reader would be so wanton as to remove the very vitals of the book and leave a rectangular hole running through from page 1 to page 275?

Well, there are plenty of precedents, I reckon; not least the works of BS Johnson, such as The Unfortunates (in which the reader can shuffle the chapters into a preferred or random order) and Albert Angelo (which has holes in the pages to enable the reader to see what comes next). Indeed, I can’t help but think that Nabokov’s swansongs, as well as Johnson’s experiments, Perec’s Life: A User’s Manual, The Waste Land and a few more would be excellent candidates for e-book status. Above and beyond than the banal convenience of being able to take 100 books on holiday, digital status would give such transgressive texts a new lease of life, taking the dear old codex into the realm of DVDs or even video games. Chapter access, extras, cheats... why just stick to the old once upon a time > happily ever after norm? I’m sure Nabokov would have been amused. And even if he weren’t, we can ignore his objections, because he’s dead.

Which leads inevitably to Geoff Dyer’s advice to writers in yesterday’s Guardian:

Don’t be one of those writers who sentence themselves to a lifetime of sucking up to Nabokov.

Still not really sure whether I’m meant to be here or not. So I’ll just test the waters with an appropriately stolen (from Everett, via others) quotation by Jim Jarmusch:

Nothing is original. Steal from anywhere that resonates with inspiration or fuels your imagination. Devour old films, new films, music, books, paintings, photographs, poems, dreams, random conversations, architecture, bridges, street signs, trees, clouds, bodies of water, light and shadows. Select only things to steal from that speak directly to your soul. If you do this, your work (and your theft) will be authentic. Authenticity is invaluable: originality is non-existent. And don't bother concealing your thievery - celebrate it if you feel like it. In any case, always remember what Jean-Luc Godard said: “It's not where you take things from - it's where you take them to.”