That madhouse we call Twitter is full of people complaining about unfaithful adaptations of books they haven’t actually read; or if they did, they’ve clearly missed the bloody point. The most egregious was the collective whining about the “excessively woke” reworking of the anti-imperialist satire The War of the Worlds, written by the Fabian Socialist HG Wells; but either side of it came dismay about Les Misérables without singing and A Christmas Carol without Muppets.

And on that note, generous portions of humbug to one and all, and I’ll see you on the other side. (Have neglected bloggery of late, for various reasons, so this is just something I lifted from a Facebook post, slightly tweaked. Hope to have a gloriously up-its-own-arse rumination on Brexit here some time before the year dies.)

Books: Most reading, at least for the first 2/3 of the year, was devoted to the endgame of my MA, but beyond that I enjoyed The Twittering Machine by Richard Seymour and Noah Charney’s The Museum of Lost Art. I also had my first work of fiction published, when my short story Nectarines found favour with The Mechanics’ Institute Review, and a very brief squib of mine prompted a couple of giggles when it popped up on Radio 4’s Front Row. Possibly not coincidentally, this is the first year I can recall when I didn’t read a complete work of fiction by anyone else. Or if I did, I can’t remember.

Films: Following the furore over Joker, I now don't know whether A Good Film is one that’s artistically satisfying, or one that ticks a certain number of boxes designed to determine some kind of moral purity. So all I’ll say is that the films I *enjoyed* the most were The Favourite and Knives Out, and the Cohen documentary Marianne and Leonard: Words of Love made me sniffle by the end. Will certainly see the new Star Wars before year end, but that transcends critical analysis; it’s more about remembering what it felt like to be nine years old.

Theatre: The only play I saw this year was When We Have Sufficiently Tortured Each Other, a reworking of Richardson’s Pamela, with Cate Blanchett. So it’ll have to be that.

Art: The Lucien Freud show at the Royal Academy was very good, in that it gave me a coherent explanation of why I don’t really think Freud is all that, actually.

Music: Again, distractions, as a lot of my listening was taken up by preparing for a brief, chaotic appearance on the radio quiz Counterpoint. Aside from that, I really wanted to enjoy Nick Cave’s Ghosteen, but I’ve come to the conclusion that I really don't like what he does with synthesizers, and he should really rebuild bridges with Mick Harvey and go back to analogue and pianos and all that bad stuff in the 80s. Instead, I liked Peter Donohoe’s Pictures at an Exhibition, and the sinus-clearing exhilaration of the Japanese punk combo Otoboke Beaver. And Grandmaster Flash at the Fairfield was huge fun for the old folks.

TV: Three shows that got a bit lost amidst the hype: After Life, the best thing Gervais has done since The Office; Don’t Forget the Driver, proving that Toby Jones is one of our greatest living performers; and Giri-Haji, which may have been a triumph of style over substance, but it was good style, so that's OK. And the ongoing Pullman adaptation is really good Sunday evening viewing.

And talking of telly, you can still watch this until January 6:

At the beginning of Richard Seymour’s The Twittering Machine, about the ills of social media:


In writing this book, I set out to avoid burdening it with references and scholarship. I want it to be read as an essay, rather than as a polemic or an academic work. But for anyone who wants to know more, or simply finds themselves asking, ‘How does he know that?’ there are bibliographical notes at the end. If you find yourself itching to research a quote, statistic, or fact, simply skip to the end and search under the page number for the relevant phrase.

You see, I’ve never understood this hostility to footnotes, but every time I’ve written a book, I’ve been encouraged by editors to rein in my enthusiasm, because they put people off, apparently. When did references and scholarship become a burden? (There are notes in the Seymour book, but they're tucked away at the back, so as not to scare the more fragile reader.) 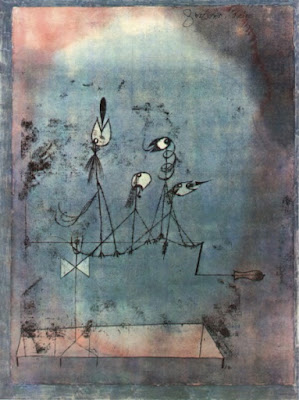