About a blog meet

So there was a blog meet. Remember them? It was when people we only knew as authors of blogs, often under whimsical pseudonyms (noms de blogue?), would gather awkwardly in a bar (the location of which would have taken days to agree on) and start to develop real-life relationships, slightly hampered by the fact that we didn’t know whether we should be addressing each other by our blog names or those that our mums had sewn onto our school jumpers. Not for nothing was it called meatspace; it was bloody and indigestible and made you sweat if you consumed too much and could wreak havoc with your bowels. The real fun came in subsequent days when we all tried to translate the analogue experience into blog form, remembering different jokes, different drinks, different disagreements and flirtations and awkward silences.

That was seven years ago or so, back when sharing Clement Freud jokes felt like a good idea. The changes that technology has wrought were obvious from the start, as The Rockmother floated the idea of a meet not on a blog, but on Instagram, which wasn’t even a thing back then. I’m not even sure that saying that something is or isn’t a thing was even a thing back then. And in the event, only three of us from the old crowd could make it at the allotted time and place, the roof garden on top of the Queen Elizabeth Hall, which is also not a thing these days, for the moment at least. (I had managed to connect earlier in the day with The Urban Woo; we drank gin in the Coach and Horses and bitched about how it’s not what it was.)

So there we are, The Rockmother and Annie Slaminsky and me, plus Slaminsky’s chum Mette, who isn’t/wasn’t a blogger, possibly because she’s been too busy having a life, but more of that later. And we talk about what’s been happening in the intervening years, divorces and bereavements, house moves and career changes, extra lines and grey hairs, broken hearts and bones and promises. And yes, Brexit and Donald Trump. And we talk about the things that unite us, about how blogging isn’t a thing and London is still a thing, but a different thing. And Mette (who doesn’t blog and doesn’t live in London) talks about how, after she left school, she ended up working on a fishing boat off the Faroe Islands for a year. Which would have made for some fabulous blog posts, surely, but maybe she wouldn’t have had the time. And I remember that the usual reason people give for stopping blogging is that “real life got in the way”.

And then the rain clouds start to gather and the passive-aggressive body language of the people stacking chairs suggests that our time at the roof garden is running out and I wonder why nobody quotes TS Eliot any more. HURRY UP PLEASE IT’S TIME and all that. And then we look around and the skyline has become one enormous Eliot quote. And some things are still a thing, at once different and the same. 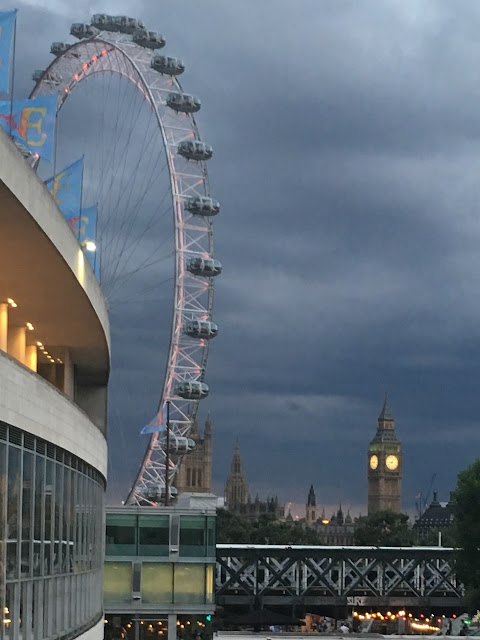