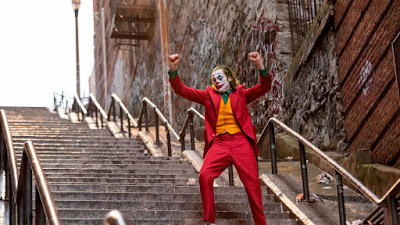 About Radiohead, and almost certainly not for the last time

Le Monde Selon Radiohead will be on Arte TV on November 8. Here’s another trailer. They let me talk in this one.

About Eluard and Bayard

Two accidental encounters yesterday. First, a fascinating radio documentary about surrealism in Ireland (isn’t this exactly what Radio 4 should be for?) reminded me of Paul Eluard’s map of the world, displaying the sizes of countries in proportion to how strange they are. (I love the Canada/Mexico border.) 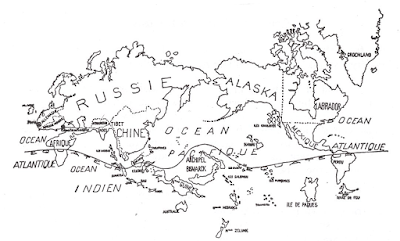 And then my virtual friend Steph (who used to be Chaucer’s Bitch round these parts) posted a nugget from Susie Dent about the 17th-century word “bayard”, which apparently means an unshakeable self-confidence that’s rooted in ignorance. Which is all kinds of relevant to the modern world, but specifically reminds me of one of my favourite books of recent years: 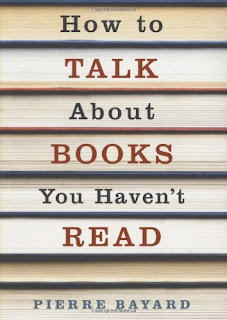 About Boris in the Forest

My old friend Robert Hackett has been creative again, and I urge you all to slurp from the puddle of his talent.

If anyone out there can be bothered to pretend to care, I’m on the BBC Radio 4 music quiz Counterpoint at 3pm UK time this coming Monday (available thereafter for a month or so on the BBC site).
Posted by Tim F at 11:24 am 1 comment: 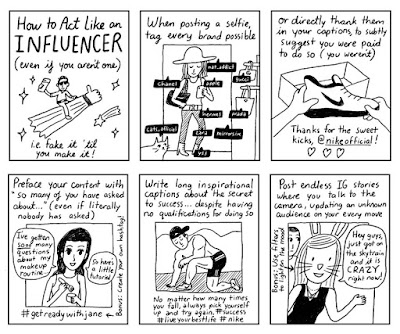 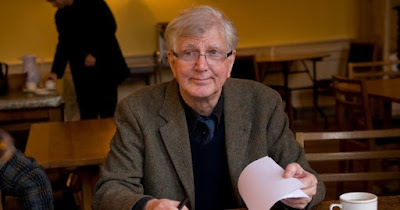 I’ve pondered the whole idea of the commodification of the alternative many times; is it a debasement of ethical principles, or the natural outcome of the individualism at the heart of the indie ethic? Is this poster by Dorothy, depicting indie classics in the form of commercial print adverts, a recuperation of rebellious instincts or a weary admission that pop music, however fragile and/or angry it has to be, is ultimately a cash-grabbing exercise? 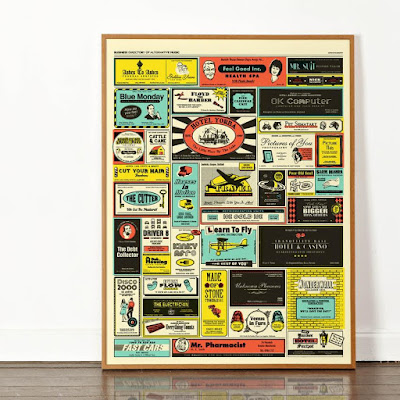 Andrew Anthony on the elites who are allegedly to blame for the whole bloody mess we’re in:


It’s easy to mock metropolitan liberals for hypocrisy. After all, they’re often opposed to gentrification, while being the vanguard of gentrifiers. They’re the loudest proponents of multiculturalism while frequently maintaining a distinctly unicultural lifestyle. But even in this age of bovine anti-elitism, it would be the height of stupidity if people who like to visit bookshops come to be seen as the problem.

About Greil Marcus and Camille Paglia

Last weekend, I retrieved several bundles of dead-tree matter from the parental loft, including a whole load of back issues of The Modern Review. Having a letter published earned one a free subscription, which is how I got to supply the punchline to a simmering feud between Greil Marcus and Camille Paglia:

A very brief appearance on Radio 4’s Front Row tonight (at about the 11-minute mark), as part of the BBC National Short Story Awards. No, of course I didn’t win, but my Twitter story was offered up as a sort of amuse-bouche.

META
“Don’t be too meta,” he says.
“You what?” she mutters, irritated.
“Don’t make it a story about the process of writing a story.”
“But people like that sort of thing,” she says. “It makes them feel clever.”
“Only people who listen to Radio 4,” he sneers.

Well, John Wilson seemed to like it, even if it drew only polite sniggers from the punters.
Posted by Tim F at 9:42 pm No comments: