I just discovered David Thomson’s biting-the-hand-that-feeds-him takedown of the Sight and Sound poll that tells us which films we should be seeking to unseat from their canonical position for the next decade. He sagely points out the distinction between “best” films and those one would actually choose to watch and rewatch if the mythical desert island became a repository for celluloid rather than vinyl:

...you’re all alone with perfect projection, so what are the ten pictures you want there simply in the name of pleasure? Don’t be shy of that hedonism, but think about your viewing habits day by day, year by year, especially during Covid. Under that shadow, what did you want to see again, and then again?

I know what he means. There are some films (off the top of my head, Requiem for a Dream, Festen, Come and See) that I admire greatly but have only ever watched once, and I’d be fine if it stayed that way. They might make their way to my to my S&S list but not to my island. 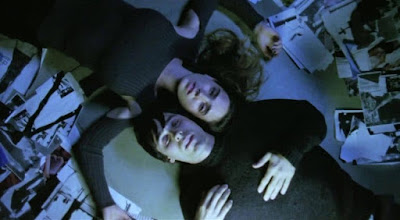 Thomson also admitss that, once one gives up the Quixotic search for some kind of universal “best” (Most accomplished? Most innovative? Most influential? Most important? To whom?) film or book or record or painting or building, then all criticism ultimately become autobiography, even when it’s not explicitly acknowledged:

I hope voters will attest to their allegiances more than make a list of pictures for their résumé. But that leads to one more modest proposal. Thinking about my life with movies, and talking to others who have trod the same path, I find this common feeling: that the films we saw between the ages of four and about 16 are vital and embedded. We grow up to understand that some of those films are mediocre, fantasies that caught us at the right immature moment. But I’m not sure the screen ever meant more or gave us the secret about what a sensational and impermanent medium it is that we now try to make Ozymandian.

I was hoping not to have to say anything about the royal family here for a long while; fortunately, the excellent Bonnie Greer has pretty much said it for me.

Want to know why the #RoyalFamily are going nowhere?

They're the space where a "body language expert" can ply their wares ;
You can project your own life on them: the good; the bad and the ugly;
The national #piñata for anything and everything.

Meanwhile, as the clown car of government disintegrates, anti-oil protestors have doused Van Gogh’s Sunflowers with tomato soup. That’s something you can’t do with NFTs. (And yes, it should have been a Warhol.) 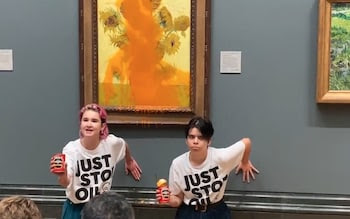 Searching for something else, I find this: 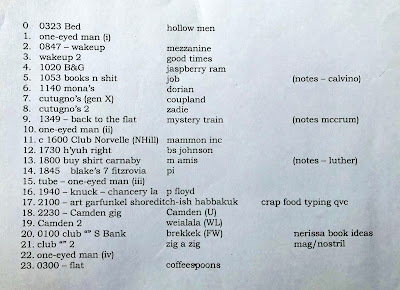 In the context of the other papers it's bundles with, I'd say it's from about 2004. I think it's a plan for one of several interations of a book that I'd started writing in about 1991, with the rather presumptuous idea of updating Ulysses and moving it to London. The “one-eyed man” is presumably the equivalent of Joyce's bigoted Cyclops and I guess the fictional pubs and cafés (if that's what they are) are meant to be analogous to the places where Bloom and Dedalus hang out.

The middle column is packed with references to what I was probably reading around that time. I'd hope that Coupland, Zadie and M Amis are self-explanatory; The Mezzanine is by Nicholson Baker, Mystery Train by Greil Marcus (unless it’s the Jim Jarmusch movie or the Elvis song) and Mammon Inc, which I confess I'd entirely forgotten, by Hwee Hwee Tan. But why are they there? Is Dorian about Oscar Wilde or Will Self or the next-door neighbour from Birds of a Feather? Habbakuk? Jaspberry Ram? And as for the third column, what the hell might “crap food typing qvc” mean?
The most coherent (or least incoherent) references (“hollow men”; “weialala”; “coffeespoons”) are to TS Eliot and I think I had the idea of weaving these into the cod-Joyce framework on the basis that, well, Ulysses and The Waste Land were both published in 1922, so, er, there's that. Which means that if I hadn't mislaid this scrap amidst a bundle of letters from my bank and cuttings about Morrissey, I might have come up with something that was worth publication this year.
And then I remember that I had the bright idea of inserting myself in the narrative, rather as Martin Amis does in Money. The gag was that I’d be working in a cloakroom (maybe in club “”, almost certainly a nod to the Modern Review’s love-hate relationship with ironic quotation marks) and would filch a peanut-packed chocolate bar from the protagonist’s jacket, enabling me to deploy a riff on the line, “and I have seen the eternal Footman hold my coat, and snicker”. Which, apart from being a truly lame joke, is from Prufrock rather than The Waste Land. That said, there does seem to be a reference (“brekkek”) to Finnegans Wake in there, which I haven’t even read (who has?), so maybe I was just chucking around several fistfuls of supposedly cool quotations and hoping that some of them would stick.
Anyway, what pet projects did you think were a good idea at the time, but now you’re deeply thankful they never saw the light of day?
PS: Rather good documentary about The Waste Land, on BBC2 of all places.
Posted by Tim F at 5:33 pm No comments: 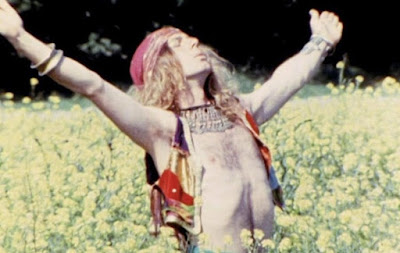 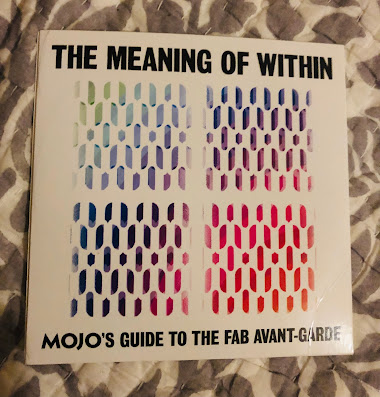 Today is the 60th anniversary of the release of ‘Love Me Do’ and this is my album of the year, despite its being a giveaway with Mojo magazine. These are the influences not on the Beatles of 1962, but on the entity they became four years later: the thousand Tibetan monks who never appeared on ‘Tomorrow Never Knows‘ the play-out groove on Sgt Pepper, King Lear on ‘I Am the Walrus’, the liminal status (song/not song?) of ‘Can You Take Me Back?’ and, obviously, ‘Revolution #9’. Delia Derbyshire and Ornette Coleman, Brion Gysin and AMM, John Cage and Karlheinz Stockhausen, music that refuses to be loved.