About Donald Trump and fleeting fame and cocksplats

I’ve neglected this blog terribly over the past year or two, for a number of pathetic and avoidable reasons, including work pressures, general lack of inspiration and the rival lure from other forms of social media. It’s not that I haven’t had anything to say — it’s just that it seemed quicker and easier to  let rip with a succinct gobbet on Twitter or even some deadpan picture caption on Instagram. Blogging — at least the way I do/did it — requires some sort of considered structure, the right word in the right place, spelled correctly if you’re lucky.

So it seems appropriate that my belated return to Cultural Snow is prompted by Twitter. What happened is this. Donald Trump, a man who might stop being funny in November, appeared in Scotland on Friday, shortly after the result of the European Union referendum was announced. He, or one of the social media gnomes who live in the yellow depths of his hair, tweeted thus: 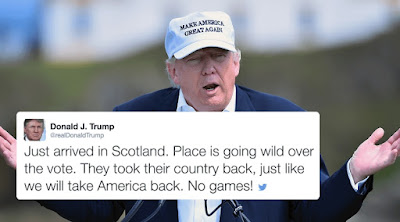 A number of people responded that, although the UK as a whole had chosen to cut ties with the EU, Scotland as a whole was very much in favor of hanging around. One or two of them probably expressed this sentiment in sober, cogent, reasoned form. I wouldn’t know, because their tweets were lost in a maelstrom of abuse, some of it colourful and imaginative, some of it puerile and profane, plenty of it occupying both spheres. And, yes, I joined in. And, no, I wasn’t in the cogent camp.

No, it wasn’t big and it wasn’t clever but, hey, Twitter, who cares, right? Well, some people do, apparently. I went off to do something vaguely useful, somewhere with lousy phone connections and forgot about my little vent. I only checked my phone a few hours later (I normally do this far more regularly, a habit that has led my 13-year-old niece to describe me as anti-social, but yeah, whatevs) and discovered that I’d gone properly viral. The tweet was liked and retweeted around the world: the current stats, if you’re interested are 2,301 likes and 1,219 RTs, which is modest by Taylor Swift standards but not bad for a balding, middle-aged curmudgeon the focus of whose career has drifted from writing about Pet Shop Boys compilations to writing about fish soup. But it was the messages that made it such fun, especially the awe-struck Americans thanking me for encapsulating their own inchoate thoughts about Mr Trump in such elegant prose and vowing to incorporate “cocksplat” into their vocabularies; a couple of them even proposed marriage. Many of them seemed to think I’m Scottish, which is odd, but not a problem. Of course, there were some naysayers as well. Apparently I’m a “low life liberal dirtbag” which can be the title of my autobiography, if @17762point0 hasn’t copyrighted it already, and, according to one Keith Bishop, “the worst kind of ignorant moron” which makes me wonder what the best kind might be.

It wasn’t only strangers. Some of my friends who aren’t on Twitter saw these articles and posted them on Facebook, a few of them very sweetly and generously declaring that they are proud to know someone who said “cocksplat” to a man who may end up as the next President of the United States. One friend came across my contribution during her grandmother’s funeral and she said that sharing it with her family brought some welcome relief to a sad day. Which is lovely.

And people are still saying nice things as I type this, but the compliments are coming at a far less  ferocious pace and pretty soon they’ll fade away. I realised that digital, viral fame is very nice, but it rarely lasts. I suspect the people we’ll remember in all this are the man who handed out swastika golfballs and this lady, who clearly decided that good, old-fashioned analogue communications would do the trick better than anything: 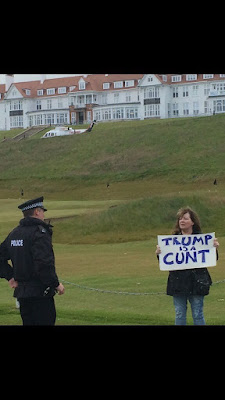 And while all this was going on, the pound was slumping to a 30-year low and the Prime Minister resigned. But, y'know, hee hee. Cocksplat.