I remember the first time I said it. My English teacher, Mr Martin, asked what a particular rhetorical effect was being employed by some dead white male or another and, having seen the word used in a book, 13-year-old me volunteered, “Is it hyperbowl?” and he said something along the lines of, “It’s a Greek word and it’s actually pronounced ‘hyperbole’ but yes, that’s right.” He didn’t poke fun at my wonky pronunciation, he didn’t crush my creative soul, he just put me right.

That was that for a long while. I barely heard the word for years (in most cases, “exaggeration” serves just as well) but when I did it was usually pronounced in the proper, Mr Martin-approved manner. In the past few years, however, I’ve heard “hyperbowl” creeping into the most unlikely places, not least that repository of educated English speech, BBC Radio 4. Things came to a head a couple of days ago when the government minister Nadhim Zahawi used it. I hesitated in responding, especially because Mr Zahawi presumably doesn’t have English as a first language, having come to Britain at the age of nine. But then I checked his Wikipedia page, calculated how much his parents must have spent on his private education once they got here, and did what Mr Martin would never have done. I pointed and I laughed. On Twitter.

It did make me wonder, though. When such solecisms occur these days, do people – those who taught young Nadhim at Ibstock Place and King’s College School, for example – not intervene because doing so would be seen as rude or snobbish or discriminatory? Or do most people think “hyperbowl” is right? In which case, in the normal order of the development of language, it actually is right, and Nadim Zahawi is right, and I’m wrong and so is Mr Martin. Which is an earth-shattering catastrophe.

Once again, we confront the thorny question of what, in 2021, one can reasonably be expected to know or understand. And, according to viewers of last night’s Who Wants To Be A Millionaire, it’s not Shakespeare’s tragedies or flags of the world or the periodic table... 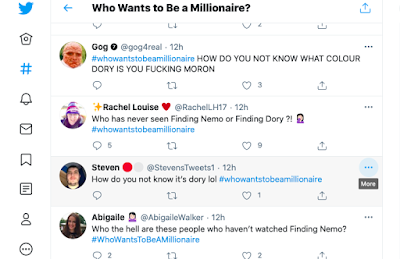 Journalists and other writers are encouraged to avoid tiresome repetition of words by employing what’s known as elegant variation, the use of synonyms to make prose less of a trudge. This can sometimes be taken to preposterous extremes of course, as in the Guardian’s fondly remembered “popular orange vegetable”.

And still it goes on. One would have thought that a recent court case in Edinburgh, in which an unfortunate gentleman had part of his tongue bitten off by a woman, and then saw the morsel snatched away by a seagull, might have been exciting enough as it stood. But no, the writer and/or the sub-editor (if the Edinburgh Evening News can still afford such fripperies) decided that on a second mention the body part had to become “the fleshy muscle”.

88.8% of young people in the UK define themselves as creative, we are informed.

Two thoughts. First, anybody can define themselves as anything they bloody well want. It doesn’t make it so.

But, rather more intriguingly, what do the remaining 11.2% call themselves? Destructive?

For a while I’ve been pondering the meaning of the long-running Private Eye feature Dumb Britain, which exists to point and laugh at the less clever responses contestants give to questions on TV and radio quiz shows. It’s all about extent and limits of cultural literacy, essentially the assumptions we make about what people should be expected to know. I referred to Dumb Britain in my dissertation, if you can be bothered to pretend to be interested; the issue was whether anyone under 50 could be expected to know the name of the Long Ranger’s horse.

I would appear that the editors have become sensitive to accusations of elitism, because they’ve started to include the correct answers. Although, if the readers need to be told what the answers are, doesn’t that suggest the hapless contestants may not be that dumb after all? 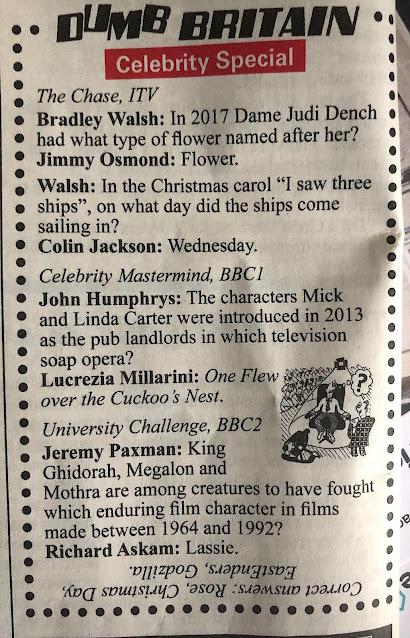