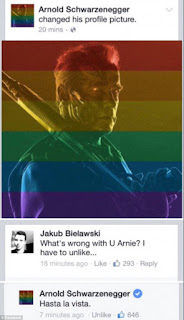 If you’ve been in the vicinity of Facebook over the past few days, you've probably noticed that many people have taken advantage of a little gadget that enables them to overlay their profile images with rainbow stripes, to commemorate the Supreme Court’s decision last week to allow same-sex marriage in all 50 states of the union. Many of my friends, real and virtual, used it.

My immediate reaction was to do the same thing — after all, I support equal marriage, I think the SCOTUS decision is a good thing and I love seeing right-wing Republicans thrashing around in spasms of impotent, moronic fury. But then, as is so often the case, I started overthinking the whole phenomenon. What would I be communicating by tinting my profile? The fact that I’m a decent, egalitarian, non-homophobic, generally liberal, 21st-century sort of person? I’d hope that people already sort of get that already. (There was also the more mundane fact that I was away from my computer when I first noticed the rainbowing, and it would have been a lot of hassle to implement it on my crappy old phone and by the time I got back home I would have felt as if I was playing catch-up.)

But it was interesting seeing some of the reactions to my friends’ assumption of the spectrum. There was an element (jocular, I’m guessing) of “ooh, I thought there was something you weren’t telling us”. That’s harmless in itself but I suppose it’s just the benign end of the assumption that if you support gay rights in any form, that means you’re One Of Them, which sounds barmy but was certainly prevalent 30 years ago. And then I started considering that if people are making assumptions about those who announce their support for the SCOTUS decision in this way, are they also making assumptions about those of us who remain rainbowless? And so I felt like this: 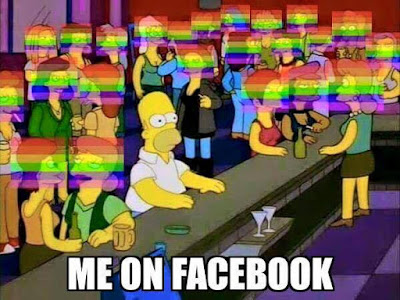 It’s that tipping point where not wearing something – a poppy, a red ribbon, a red nose —can be taken as a statement in and of itself, even if you don’t mean anything by it. Am I by default a homophobe, an ally of the buffoon Scalia and his dimwit Supreme Court rightists? Or did I mean to buy a rainbow from the nice lady outside Waitrose but I only had a fiver and it would have looked weird to ask for change?

At least I don’t now have to contemplate the dilemma described by one of my Facebook friends:  “When is the politically correct time to return to a regular (rainbow-free) profile pic?”

PS: And yes, this is my first blog post in two months. What of it? I’ve been busy, doing stuff like this rundown of the best new restaurants in Bangkok. So there.
Posted by Tim F at 5:20 pm 5 comments: