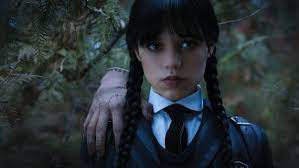 Wednesday is the latest in a noble tradition (Inspector Clouseau, Frasier Crane, PC George Dixon, Rosencrantz and Guildenstern, et al...) of secondary or marginal fictional characters being spun off to become stars of a new venture; in this case, it’s Wednesday Addams, scion of the proto-Goth family that began in cartoon form in the New Yorker as far back as 1938. In Tim Burton’s new Netflix product, the character (most famously played by Lisa Loring on TV and Christina Ricci on film) is wrenched from her kinfolk and deposited in a New England boarding school.

It has a lot going for it, including an excellent overall look, and some nice one-liners. (Presented with a black dahlia as a welcome gift to the school, Wednesday deadpans, “It’s named after my favourite unsolved murder.”)

But there’s a fundamental problem. In their move to the status of protagonist, previously sidelined characters are inevitably fleshed out, given enhanced back stories, friends, families, jobs that we don’t know about. But the whole point of Wednesday is that she’s a blank-faced vacuum, a vehicle for existential bleakness, with nothing behind the stare. The new version, played by Jenna Ortega, is on screen almost the whole time and a vacant glower isn’t enough to keep a big-budget show running on its own. So, although she’s still dressed in black and expresses bristling contempt for conventional pieties of niceness, Ortega’s Wednesday is humanised. Even before the opening credits, when she dumps piranhas in a swimming pool to punish the jocks who are bullying her little brother Pugsley, she allows herself a small smile of triumph. Old Wednesday, real Wednesday, would never allow her cool to crack so much.

Overall, she’s closer to the high-functioning autistics inhabiting The Big Bang Theory than the (literal and metaphorical) monsters that Charles Addams created. Ultimately, she’s good. And, in this case, that’s bad.

Email ThisBlogThis!Share to TwitterShare to FacebookShare to Pinterest
Labels: TV

The content of Freedom, the exhibition that Ai Weiwei has curated for Koestler Arts from works by British prisoners, has all the hallmarks of outsider art, with its naîveté, sometimes shaky technical skills and general lack of awareness of what Saatchi’s buying these days. Except that outsiders is very much what they aren’t, of course. 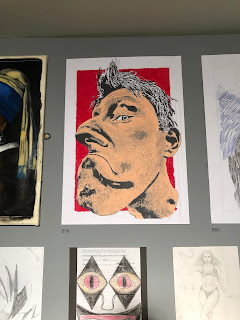 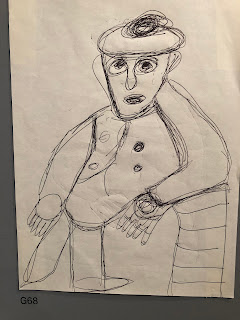 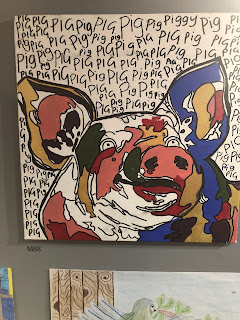 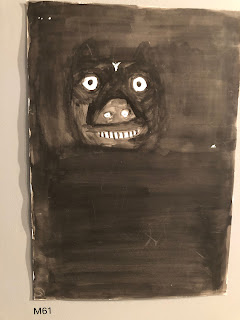 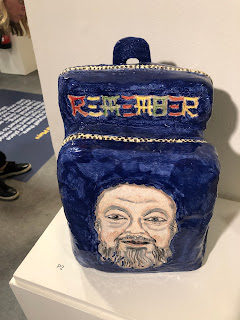 About the World Cup

No, I probably won’t be watching, although it’s as much time pressures and a general sense of ennui rather than any objection to Qatar’s record on human rights or even the venality that got them the gig in the first place. But I am intrigued by the Fan Leader Network, supporters whose tickets, travel and accommodation have been comped in exchange for “enthusiasm and positive social media comment”. I mean, how can enthusiasm be measured? How do you value performative ra-ra-ra? What sort of comment by one of these Potemkin fans would prompt the Qataris to ask for their money back? (They’ve already cancelled the per diems.) Ah, I know what it reminds me of...

The academic study of literature leads basically nowhere, as we all know, unless you happen to be an especially gifted student, in which case it prepares you for a career teaching the academic study of literature – it is, in other words, a rather farcical system that exists solely to replicate itself and yet manages to fail more than 95 per cent of the time. Still, it’s harmless, and can even have a certain marginal value. A young woman applying for a sales job at Céline or Hermès should naturally attend to her appearance above all; but a degree in literature can constitute a secondary asset, since it guarantees the employer, in the absence of any useful skills, a certain intellectual agility that could lead to professional development – besides which, literature has always carried positive connotations in the world of luxury goods.

I suspect that if I were starting a blog today rather than 17 years ago, I’d take inspiration not from Murakami’s deadpan insouciance, but from Michel Houellebecq’s dead-eyed resignation. And you’d be reading (or, more probably, not reading), something called Basically Nowhere. 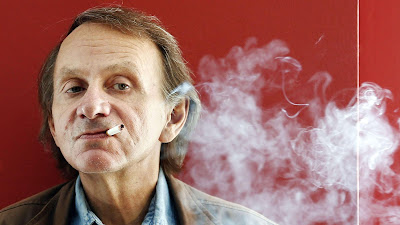 About what I missed

Have been a bit distracted lately, so here are two things upon which I’ve alighted only recently. First, OK Computer all at once — all the tracks played simultaneously.

Somewhat inevitably, it sounds not unlike the orchestral freeform bits in A Day in the Life, but I suspect that would happen if you objected most albums to similar indignities. Oh, did I mention that I once wrote a book about OK Computer? (And yes, if you go to that site the first review is from someone who called it “a phenomenally dumb book” although I still get a perfect score for a book that neither I nor anybody else wrote, so there’s that.)
And then, a magazine that has got to issue 13 without me noticing it and I’m now tempted to hunt down back issues of The Fence, or maybe even to send in a contribution on spec, something I don’t think I’ve done for more than a decade. It clearly owes something to Private Eye in terms of aesthetic and attitude (two-colour, non-glossy, print-first, London-y without necessarily being about London) but its subject matter is wider-ranging (in this issue, TS Eliot, clip joints, five-a-side football results, Zimbabwean goblins). There are no ads, so I couldn’t work out how it’s survived so long, although this article suggests a wealthy, aristocratic benefactor has been handy. Which should annoy me, but for some reason adds to its ramshackle, flâneuristic charm. (If it were a hedge-fund manager behind it, I’d be annoyed.) 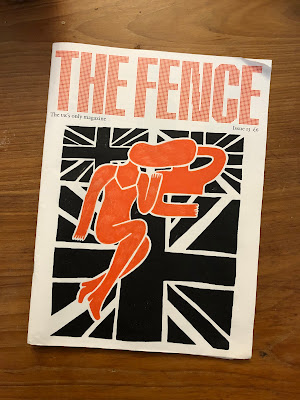 And now, I go back to being distracted.
Posted by Tim F at 4:13 pm No comments: