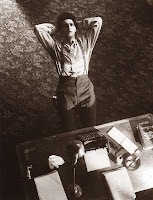 These are trying and confusing times for those of us who make words do vaguely interesting things and hope to be paid for our efforts occasionally (apart from full-time Scrabble hustlers, they’re remarkably sanguine about everything). Oh noes, says Ewan Morrison in The Guardian, the book is dead, and pretty soon “writing, as a profession, will cease to exist.” Hey, chill, says Lloyd Shepherd in the same fine publication, it’s just changing, not dying, y’know, like a Time Lord. (I made that last bit up.) And John Walsh in The Independent awakens from a long lunch just so he can worry that kids today don’t read Fowler’s Modern English Usage like they used to. He then worries even more, because his publisher’s buggered off without paying the bill. (I’m afraid I made that bit up as well.)

I believe times are a-tricky in freelancing. Are you finding that?

They are indeed, but I’ve just landed myself a modest staff job, so I can relax a little.