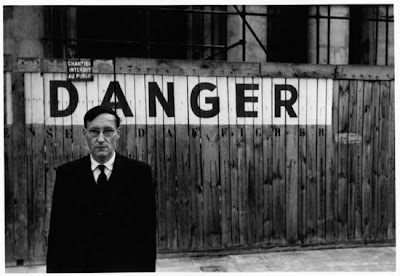 I know writing isn’t perceived to be the most macho profession around. Sure, there have been writers with a propensity for guns and fighting and similar blokey pursuits – think Hemingway, Burroughs, Mailer, Hunter Thompson – but this usually took place separately from the actual process of wordsmithery; sometimes, indeed, the violence appeared to be a form of compensation for the fey inactivity of the authorial mode.

So I had to flag this one up: West Wing/Social Network scribe Aaron Sorkin has managed to break his own nose while working on a script. You have been warned.
Posted by Tim Footman at 7:41 am

I once chipped a fingernail, typing too hard.

A little too close to the grindstone, perhaps?

I once jammed my foot in my mouth commenting on Dave's blog.

I headbutt myself regularly while struggling with writer's block. It's never accidental though.

And his shoulder to the wheel, Martin. Gave him a nasty hernia.

Rog: If you hadn't, Dave would have been quite justified in jamming it for you.

Does it affect the whooshing sound, Rol?