Every day I edit the book

I’m quite fond of Twitter, but every now and then I think of a delightful yet useless task that could be perfect for the medium, were it not for the pesky 140-word limit. What fun we might have with “Elvis Costello songs and/or albums that would make good titles for those Bret Easton Ellis books that aren’t already named after Elvis Costello songs/albums” if it could be squeezed into a hashtag and still leave room for replies. 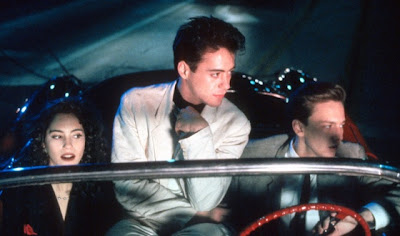 That said, do you know what comes up first when you Google “Less Than Zero”? Not the Ellis book, nor the Costello song that provided its title, but the film. Which Ellis, in his most recent novel (named after a Costello album, give or take a consonant), describes as “...a beautiful lie... very colorful and busy but also grim and expensive, and it didn’t recoup its cost when released that November.” And if Costello hasn’t written a song called ‘Beautiful Lie’, or even ‘Busy But Grim’, he really should have done.
Posted by Tim Footman at 9:29 am