A postmodern post-mortem: or, the metafictional paradox of Ernie Wise’s hairpiece 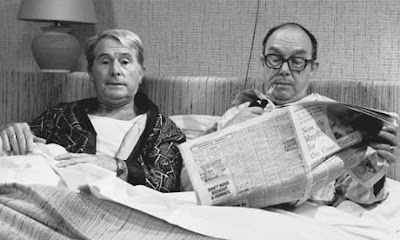 So postmodernism has an exhibition dedicated to it, which probably means that it’s dead. Hari Kunzru (in The Guardian) and Edward Docx (in Prospect) would both agree, although they differ over the precise cause: the former says it was 9/11 and the internet, while the latter thinks we all  just got bored and decided to read Jonathan Franzen novels instead. They are unanimous, however, that: a) postmodernism as a movement was characterised by a desire to break away from pre-ordained notions of taste, morality, even reality, but aside from that it’s quite tricky; and b) the Talking Heads movie Stop Making Sense was very postmodern indeed, thank you. The problem is, though, that as soon as they agree on b), the validity of a) gets a bit of kicking; if postmodernism was tearing up the canon, it’s entirely inappropriate that it can only easily be defined with reference to a canon of its own. (Although in a truly postmodern universe, the concept of “inappropriate” also ceases to have any meaning.)

The same problem applies to such pieces of chinstrokery as Stuart Jeffries’ 10 key moments in postmodernism (also in The Guardian) and a slightly older 61 postmodern reads (from the LA Times). In this instance, if you *are* on the list, surely you can’t come in. Part of the problem is that postmodernism remains all but ineffable, and so rather than formulate a coherent definition of what it is, we find it far easier to point to individual fragments of cultural jetsam and say, yeah, that’s postmodern, so if you see something else like that, it probably is as well.

Which leaves me with two thoughts. First, if authenticity and sincerity  and Franzenicity are the concepts that have replaced postmodernism in our collective affections, then how do we deal with the likes of Jade Goody or William Hung, who have commodified “realness” into a sort of hyperauthenticity, bewitching the media with their finely spun un-spun-ness?

The other notion is that to be truly postmodern is to be self-aware, to go through life flanked by metaphorical quotation masks. And yet if you point too hard and too long, it rather spoils the joke. Which is why the defining artefact of postmodernism should not be a Talking Heads movie nor a Philip Johnson building nor even a pair of Tracey Emin’s pants, but Ernie Wise’s wig, which became a cultural touchstone for an entire generation, despite the minor inconvenience of its non-existence. In fact, it took the notion of the simulacrum into places that even poor, dear Baudrillard couldn’t have conceived: you could see it as an original (Wise’s hair) pretending to be a copy (Wise’s wig) of something that purported not to exist any more (the hair again); or indeed as a reality that wasn’t real, masking – literally and figuratively – something that had never existed (Wise’s baldness).

"if postmodernism was tearing up the canon, it’s entirely inappropriate that it can only easily be defined with reference to a canon of its own"

Yes. I liked some postmodern writers when we came across them at college, but was a bit irritated by the fact that they seemed to diss the C19th omniscient authorial voice whilst not being able to do without it, (because it was what they were defining themselves against. If they were so damn clever, wouldn't they invent something new rather than deconstruct something old?

Also because I think a lot of them couldn't really write a decent plot & invented the concept to disguise this fact.

I'm trying to give up brackets. Half way there.

i Could Never Understand Why He Didn't Put His Hair In Curlers Before Going To Bed..........

I like it.
But I'm not in te mood to bu funny. Even about Ernie Wise.
Not you. It's me.

I suggest that in a post-postmodern world we try and lose the desire to catagorise that which need not be categorised - surely if a creative work has quality and qualities that give the audience intellectual or emotional reward then it is valid as an entity, no matter which pigeonhole it has been stuffed into?

Annie: I think Joyce proved how difficult it is (for readers as much as for writers) to jettison conventional notions of narrative, character, etc entirely. Apparently there are some pretty hardcore JJ scholars who will admit to having skipped chunks of Finnegans Wake. So postmodern fiction still keeps a few toes in the pool of conventional narrative techniques - if only to make fun of them.

Good point, Tony. And a hairnet.

True, Pisces. Even when postmodernists try to do away with objective critical forms, a canon forms anyway, although whether that's the work of critics and academics, or ordinary punters, I'm not sure. But Borges, Nabokov, Vonnegut, Pynchon, Calvino, Barthelme etc (plus, retrospectively, Cervantes and Sterne) do represent a notion of "the best" of a genre just as surely as the Dickens-Brontës-G Eliot axis does.

Tim: True, but all of the authors mentioned are, in my opinion, unique in their style, content and effect on the reader; they certainly do not deserve being allocated a genre.

Was checking out that list of postmodern reads in LA Times and of course amused to note that Sterne was such an influence on postmodernism (writing, not art one would hope) that HE, in some retrosynchronicitous (nice word!) postmodern way, was postmodern himself, despite being eons pre-modern.

Not to mention Robert Burton and Nathaniel Hawthorne! So it seems every ancient tome in which the author says, "Hey, I, 'the author', am writing this book," makes it postmodern retrospectively... Homer? Chaucer?

What it means to me is that instead of being a follow on from modernism, postmodern fiction is more of a look back to the original ways of writing those things which came to be known as novels.

Just goes to show how stupid people get when they talk about postmodernism, myself included.

No offense intended to you of course.

oops, I think Annie) said pretty much the same thing, only with less self-awareness and more grace.

btw I used to be able to recite the first sentence of Finnegans Wake and also (small) chunks of the Anna Livia Plurabelle section. And the first stanza of the poem in Pale Fire. And something else I forgot. Never understood a word of any of them. Not one single word.