9/11: I never could get the hang of Tuesdays A couple of years back, I wrote a book. Maybe you noticed me mention it. Did you read it, or at least buy it and mean to read it? Some people did, which was nice. It’s still available by the way; as far as I know, no copies were looted. Anyway, it was a book about the Noughties, and as such, there was rather a lot in it about the events of September 11, 2001. Indeed, it’s probably fair to say that I cast 9/11 as the main character in the drama of the decade, the point around which everything else revolved. Which is hardly a radical piece of historical revisionism, but almost as soon as the book had gone off to press, I began to have my doubts. A few years before, I’d written a piece for The Guardian about the way that, post-9/11, the slightest disturbance in New York City seemed to trigger alarms in editorial offices in all corners of the world, even if it turned out to be caused by a common-or-garden accident; so a plane crash in NYC that kills two people is the headline in Le Monde, edging out a train crash in France that had killed 12. But in writing the book, I’d put my scepticism to one side, and worked within the mainstream, Applecentric perspective.

But it still niggled: was this agenda really viable? Was 9/11 really the lynchpin of the decade, for everyone from Beijing to Bamako? Were the 230,000 people wiped out by the 2004 tsunami really a smaller blip on the decade’s radar than the 3,000 who died in the terrorist attacks? In some of the articles I wrote to tie in with the book, I did try to raise the possibility that the overwhelming significance of 9/11 was a question of geopolitical perspective, but I really didn’t have the courage of my convictions. (I hope, however, that I’ve earned a little kudos for linking the phrase “false dawn” to the election of Obama.) Anyway, multiple brownie points to David Rothkopf, whose Foreign Policy article identifies 10 – T*E*N! – things about the past decade that were bigger than 9/11.

Also: the late David Foster Wallace, in 2007, tells the truth by asking questions; Rupert Cornwell on a wasted decade; Blackwatertown offers the journalist’s angle; Mrs Peel checks out the visuals; and Christopher sums up everything so neatly and sweetly that I don’t know why the rest of us bother.

But I will anyway. Since everyone’s been pitching in with their where-were-you-when story over the past few weeks (we’re all Zapruders now), I’ll bore you with mine one last time. I was in the British Museum, which had a small display dedicated to the work of the architect Norman Foster. I was particularly interested in the Millennium Tower, a projected development in Tokyo which, had it been constructed, would have been the tallest building ever. To give some idea of scale, they put the model alongside simulacra of about a dozen other buildings that had been, at the time of their construction, the tallest in the world, going back to the Eiffel Tower. So, when I got the call telling me that the first plane had hit (I seem to remember the news of the second strike coming while I was looking for a pub with a telly) I was standing over a model of a building that never was, and a couple that very soon wouldn’t be.

(The image above is an Indian pharmaceutical ad from around 2003, courtesy of Gothamist. And below is a place where the towers still stand.) 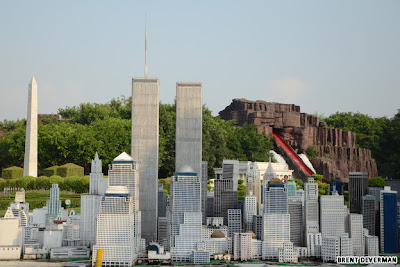 We went to see Decade this weekend, (Guardian review here.) It was a National Theatre production but the venue was a tower block in the Docklands, & the set/auditorium was a mock-up of Windows on the World. They had invited different playwrights and writers to give their perspectives on it (it was verrry long, 3 hours.)

Simon Schama's piece was about people at the time asking him over & over WHAT IS THE HISTORICAL SIGNIFICANCE OF THIS? But he was more worried about getting through to his wife on the phone in Manhattan. I guess that's why its significance has been overblown - because it was such a compelling human drama, and everyone could see it being played out.

I guess it's nigh-on impossible to completely untangle the knot of elements that determine a particular story's "newsworthiness". There's certainly no simple calculus of suffering whereby Story A is more important than Story B because it involved more fatalities and injuries. Once the numbers become high enough, they almost cease to matter. Is it really 100 times more shocking to hear that 230,000 people have died than 3,000?

The 2004 tsunami, for example, was a terrible tragedy but it was also one of limited consequences: how best to care for the survivors and deal with the damage caused.

9/11, on the other hand, had plenty of aspects to bump it up the Importance Index: large-scale human tragedy; real-time footage of the attack and its aftermath; occurrence in a single city familiar to most people around the world; clearly of geopolitical significance; caused by people who could be blamed, found and punished, etc, etc.

Was it the most important event of the noughties? That's impossible to answer because "importance" is relative. Most newsworthy? Quite probably, yes.

I checked out the Zapruder link and found it wanting. I've always been fascinated by this footage of the driver clearly taking the second shot at Kennedy with a pistol as punted by William Cooper who subsequently was killed by his local constabulary. It could be special video effects of course though it's a little early for conspiracy theorists to have that kind of kit at their disposal.

About the one minute mark.

I think that's a key point, Annie. 9/11 didn't change as much as it seemed (unless you were one of the people directly affected by the events of the day). But lots of more significant things were done in its name. Plenty might well have happened anyway.

The location factor is significant, Philip. An attack on NYC gets the attention of the world. Maybe an attack on some mythical Smalltown, Kansas might have grabbed Americans even more.

Couldn't Cooper have done the decent thing and filmed his own death, Charles?

Bizarre.
You weren't tempted to, you know, alter the display while you were there to keep up with reality?

Remember that we had no visual confirmation at the time. As far as we were aware, it was the architectural equivalent of a flesh wound.

So I like to think that I was tempted to flick the little models over, but I suspect that's just a retrospective bout of mordant symbolism.

I'm mildly pleased that you knew Bill was a bit of an arsehole. It fits neatly into my propensity for confirmation bias.

Have you read the Robert Morning Sky eulogy?

BTW Annie. Are you red haired and Jewish or have I built a composite of you that is way off the mark?