Jiving us that we were voodoo

Sometimes people send me links to things, in the hope that I’ll mention them on the blog. Apparently they’re not terribly bothered whether I’m nice or nasty or indifferent about them, provided the product gets a mention. I will however take this opportunity to note that Anatomy of Norbiton is delightfully odd; and that High50 isn’t my sort of thing quite yet, thanks, although I did catch myself last night ranting about why people today are rubbish because they listen to Justin Bieber when they could be enjoying Marlena Shaw, so maybe I really should spend more time there. Oh, and I just got an e-mail to remind me to remind you that Rock’s Backpages will be 10 years old in November, but since that’s got some of my stuff on it, that’s hardly a disinterested plug.

A link, however, is just a link; every now and then someone sends me something analogue and meatyspacey. The estimable Howard Male, for example, who put my way a copy of his novel Etc Etc Amen. And I think the solidity, the realness of the book is what caught my attention, rather more than an e-book might have done. The author has had some copies made up through the auspices of lulu.com, but it’s fairly clear that this is just a means to an end: he wants a proper, old-school publisher to pick it up. And there are plenty of arguments to be had around that notion, and whether a book only becomes a book when a publisher says it is (and backs that up with hard cash) but we’ve been there, haven’t we?

Etc Etc Amen is a novel about rock music. Except that it isn’t of course, because plenty of people have attempted to write novels about rock music and failed: the best stab was, in my far-from-humble opinion, Nik Cohn’s I Am Still the Greatest says Johnny Angelo, but that’s another story, literally and figuratively. 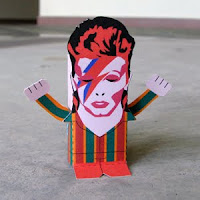 The plot revolves around Zachary B, a glam rock star whose identity clearly owes much to David Bowie and Marc Bolan, but is specifically distinguished from either (Bowie lends him his Stylophone). He’s clearly clever and talented, but not as much of either as he thinks he is. Success makes him something of a petulant ponce; failure just makes him a self-pitying git. Male wisely  avoids attempting to render the actual process of music-making in fictional form, apart from a deliciously bathetic comeback gig in Trafalgar Square. He’s far more interested in those that feed off rock’s festering corpse: the journalist who gets too close; the eerily calm stalker; the fans who turn his slightest utterances into a religion. And this is where things get interesting.

The narrative, which boogies back and forth between London in the 1970s and Marrakech in something approximating the present day, is broken up by philosophical screeds expounding the KUU, the Knowing Unknowable Universe. It’s a sort of fundamentalist agnosticism, and I personally found its details eminently skippable, but then I gave up on the poetry in Pale Fire, so what do I know? That’s not really the point, though. Just as the nature of Zachary’s music is all but irrelevant, so is the content of the KUU. It’s the effect that each of them has on people that matters, the ability of rock and religion to persuade people to do bloody stupid things. It’s not necessarily an original idea (think of Bowie’s leper messiah) but Male is more convincing than most in persuading us that fandom can snowball into something bigger and worse: the climax is like the Jonestown Massacre choreographed by the Marx Brothers. And who’s to say that’s not feasible? People must have looked on the early Christians in a similar manner to the way we see those Bolan fanatics who gather at Barnes Common every September.

Male hasn’t written the Great Rock ‘n’ Roll novel, but then I don’t think anyone ever will. What he has done is to write one of the smartest, most knowing books about fandom since Nick Hornby’s early stuff. The text could possibly do with a modest trim, and there are a few typos here and there, but that’s what publishers are supposed to deal with, right? So, publishers – deal with it.
Posted by Tim F at 7:14 am

Sent by Howard, who was having trouble with OpenID:

Thank you so much for your kind words about my novel, Tim. It was a thrill to get a more comprehensive response to the book from someone who felt no obligation to just give me a metaphorical pat on the back simply for having written a book! Let’s hope one or two publishers/agents do read your generous comments and hand over some dosh so I can start on the sequel (already in the planning stages).

My only slight disappointment is that you felt the need to skip some of the KUU philosophy. Yes, you explained your predisposition to this kind of writing, as you saw it, but The KUU Hypothesis a part of the novel I am particularly proud of. It took me a solid year of work to produce a feasible and – I think – actually fairly practical and even rational (within its own parameters) new religion which is actually anything but the fundamentalist religion your skip-through led you to believe it was. :-) And, more importantly, its contents do have a fundamental influence on the characters in the novel as their varying degrees of solipsism dictates the relationship they have with a set of ideas which focuses on the notion that remarkable coincidences might be cosmic nudges from the Knowing Unknowable Universe. So I would disagree with your perception that the contents of KUUism are irrelevant, Tim.

But to return to the idea that KUUism is ‘a sort of fundamentalist agnosticism’. Agnosticism? Certainly. Fundamentalist? Certainly not. What fundamentalist religion would have as its first two non-commandments, You can laugh, and, You can doubt? Or for that matter suggest that you go off and think up your own religion, rather than just take onboard this one? KUUism even goes as far as to say that blind faith should be frowned upon, and that ‘entertaining the possibility’ is as far as you should go with hypothetical deities (ie all deities). Even the very title of this novel is meant to sum up this whimsical notion of a religion which can be treated with throwaway casualness rather than fearful prostration.

I think if you understand these necessary details about KUUism, you understand a whole further layer of satire in ‘Etc Etc Amen’. One idea of the novel was to point out that with even the most reasonable and playful of spiritual ideas they’ll still be folk forcefully predisposed (I would suggest by a powerful biologically inherited predisposition) to force this warm fuzzy round peg of an idea into the squarest of fundamentalist holes. And then they’d be other folk waiting in the wings ready to exploit the gullible by making a fortune out of them.

As far as I know, no novel before ‘Etc Etc Amen’ has given the reader such a comprehensively shaped alternative theology. My reason for doing this was to try to make credible the idea that hundreds of thousands of ‘faith refugees’ could be drawn away from Christianity, Islam and Judaism by the open arms of an alternative set of ideas. If I had chosen not to completely map out those ideas I feel I would have done both myself and my potential readers a disservice. So, to sum up, KUUism is the supple backbone of ‘Etc Etc Amen’ without which it just would have been a rather shallow murder mystery peopled by 2D archetypes.

But let me conclude by thanking you again Tim for getting through ‘Etc Etc Amen’ despite its road humps of KUUism. I used to be grateful when someone listened to one of my 15-minute demo tapes, so you can imagine how much more flattered and honoured I am when a writer of your calibre manages to find the time to plough through 300-odd pages of what is essentially an epic piece of self-indulgence! Best wishes, Howard