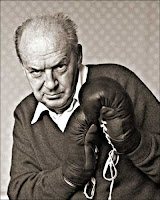 I've finally read Vladimir Nabokov's Pale Fire, at the third or fourth attempt. Which, if nothing else, allowed me to savour for the first time such linguistic dim sum as "...an old but unused pocket diary optimistically maturing there until its calendric correspondencies came round again" or "...when I hear a critic speaking of an author's sincerity I know that either the critic or the author is a fool." And it's not even his first language, the bastard. Now I start to understand why the likes of Martin Amis turn into swooning schoolgirls at the merest whisper of Nabokov's name, and why his long-awaited posthumous novel is provoking such drooling anticipation; it's not just the one about James Mason being a nonce.

It's important to explain Pale Fire's unusual structure: it consists of a foreword; a four-canto, 999-line poem, 'Pale Fire', by the late John Shade; a wildly discursive commentary on the poem, by Charles Kinbote; and a brief index. In the course of the commentary (by far the longest section of the text), we learn that the three-way relationship between Kinbote, Shade and reality is not as it may seem, although the fine details of what the internal truth may be are still getting thrashed out by Nabokovians.

So how did I manage to get through it this time? Simple: I skipped the poem, which is where I came to grief at previous attempts. As I've said before, I seem to have lost the ability to process poetry; but 'Pale Fire', the poem, as far as I can deduce, is a MacGuffin, a framework upon which Kinbote hangs his delusions. The notes are the important bit.

As Shane Richmond pointed out a few months back, Tolstoy's historical ruminations in War and Peace are sometimes excised from the main text and put in their own appendix, which is surely an implicit admission of skippability. But is this justifiable? Isn't it like reading a Reader's Digest Condensed Book, or going into an exam with nothing but CliffsNotes in your head?

David Frum, sometime speechwriting wonk to the soon-to-be-ex-President of the United States, developed an intellectual defence of such superficiality:

When I was in law school, I devised my own idiosyncratic solution to the problem of studying a topic I knew nothing about. I'd wander into the library stacks, head to the relevant section, and pluck a book at random. I'd flip to the footnotes, and write down the books that seemed to occur most often. Then I'd pull them off the shelves, read their footnotes, and look at those books. It usually took only 2 or 3 rounds of this exercise before I had a pretty fair idea of who were the leading authorities in the field. After reading 3 or 4 of those books, I usually had at least enough orientation in the subject to understand what the main questions at issue were - and to seek my own answers, always provisional, always subject to new understanding, always requiring new reading and new thinking...

Except that the last bit sounds like wishful, rather than new thinking.

So, what's the biggest thing you've read or seen or heard or done, without really doing it properly?
Posted by Tim F at 3:16 pm

Ignoring the poem saves all the going back and forth. But the index is good.

They should do an edition with the notes on the same page. But I doubt that would be practical.

A James Joyce, I believe it was Finnegan's Wake. I came to a seminar and had to bullshit quite creatively after only having read the first page.

'..the novel his dying father commanded be destroyed' - what a bastard!

At my freshers' "meet the staff" session, I attempted to engage the professor of Old Norse in a conversation about Icelandic on the strength of having once read a Desmond Bagley novel, which was set in Iceland.

Was once meant to write something on Tango by Mrożek and Pharaoh by Bolesław Prus and hadn't read either, though I'd read a page or two about Tango and sat through five minutes of a film-version of Pharaoh. The results were poor.

Keep never making my way through Don Quixote. Will I go to hell?

Not having bigged up on the Classics I always found 'Ulysses' a trial.

These days I am Buck Mulligan's second cousin, twice removed.

I was sitting with a buddy for drinks and he asked, "Have you read 'Pale Fire'?"

I replied, "I was the shadow of the waxwing, slain
By the false azure of the window pane.
I was the smudge of ashen fluff and I
Lived on, flew on, in the reflected sky."

"That'd be a 'Yes' then," he said somewhat non-plussed and sipped his beer.

Truth is, I had read it 30 years ago, loved it, and had memorised the the opening lines, just in case someone in the future had the nerve to ask me if I had read 'Pale Fire'.

A 30 year old parlor trick had finally paid off.

I only skipped the last 2130 pages of 'Remembrance of Things Past'. Most people skip the last 3000 pages.

Opening lines of the poem I mean.

The poem is funny actually and worth slogging through. It contains an excellent p*ss-take on near-death experiences.

Or a hypertext version, Billy, like this Waste Land site, which has notes on the notes.

There are proper academic Joyce specialists who've dismissed FW as unreadable, Annie. I'm amazed you had to do it at undergrad level. I gave up after about six pages.

Nice one, Marsha. At my equivalent session, I told a tutor that one of the set texts was quite enjoyable, but the notes weren't very helpful. Guess who'd written those...

Relying on the film isn't cheating, Pleite, it's intertextual. Remember that.

Hi, Expat: Yes, it is funny, but it loses something without the commentary. Which is why Billy's notion of simultaneous notes seems to be a good one.

It's not just Martin Amis you know. I've had a few good swoons over that book myself.