One thing I love about LibraryThing is the chance it gives you to create whole lives for strangers on the basis of their book collections. But I'm almost at a loss when it comes to one bfromma, who I noticed because he owns a book that I wrote but of which I don't appear to own a copy (and wouldn't want to, and I only wrote it because I really needed the money).

Bfromma, if we can judge from her/his online catalogue, owns 12 books. One could make a few assumptions on this basis alone, but wait: the 12 books cover six subjects. There are two volumes each - no more, no fewer - on the following subjects: Blink-182; Slipknot; Pink Floyd; Motley Crüe; The Texas Chainsaw Massacre; and the Manson killings. 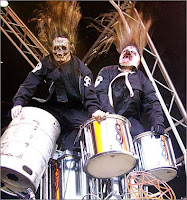 A collection such as this does not come about by accident, I feel. This is a man (it has to be a man, no?) who wakes up one morning and declares: "I wish to become more acquainted with the story of Iowa's finest mask-wearing nine-piece rock combo, Slipknot." Having perused one volume on the subject, he realises that all such narratives are necessarily subjective, and acquires another. He reads that, and now, he feels, he gets Slipknot. If someone at his place of work holds forth about Slipknot, he can keep up with the conversation. "Ah yes," he will remark, "but did you know that they were originally called The Pale Ones?" His colleagues will be impressed. Perhaps they will ask him out for a drink, or invite him to join their shove ha'penny team. Maybe Francesca from marketing will be sufficiently moved that she will be persuaded to touch him in an intimate manner at the Christmas party. This is what happens when you possess two - two - books about Slipknot.

Come on Tim - you're only miffed because the other Blink 182 book got 5 stars.

If you only own 12 books, why would you be drawn to LibraryThing in the first place?

Mind you I've only entered about 85 or so of mine, because I find the whole data entry thing very tedious, and the room where I keep all my books is very cold.

Very dark. Even the Floyd book is about that black strat.

He might have 85 other books he can't be bothered to enter.

I've been tempted to join Library Thing but the idea of spending years typing in the names of all my books doesn't appeal. Isn't there a way of photographing them and it recognises them from the picture?

I'd be worried about him listing your Blink 182 (what possessed you?) book if I were you.

You're quite right, Murph. That's what keeps me awake at night.

Patroclus: "...and the room where I keep all my books is very cold." A rival to "I have three felt pens", I feel.

Yes, Geoff. And doesn't that one sound the most thrilling of the lot. "Then, on 25 September, in Cleveland, Gilmour's guitar went 'SQWEEEEEEEEUUURRR-SNNK'"

Not 85, Billy. Has to be an even number. And you just need to key in the ISBN, and it works like magic. Well, usually.

Garfer: Or the drummer from Pink Floyd. That would be worrying.