I've always thought that when Vint Cerf and his chums concocted the Internet, the mental image they had was along the lines of a Mondrian painting; but once the blessed Sir Tim got hold of it and added his magic W's to make it accessible to the likes of us, it turned into something a bit more Jackson Pollock.

Now, however, we are in the age of Twitter, with everyone from Stephen Fry to MC Hammer muscling in on a slice of 140-character action; Stan Bête recently enumerated its delights. But this time, there's no need to guess what the inspiration was: 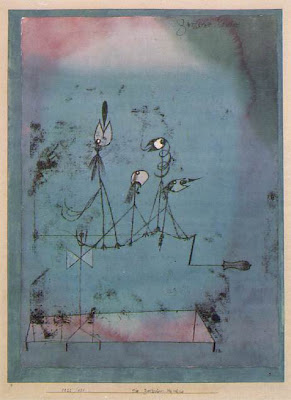 I remain in awe of your ability to think of brilliant blog post titles.

Is the character at top left saying 'Eating a feather before going into a meeting, nom nom nom'?

I'm awestruck and deeply envious of this entire post.

Sorry to be a tw@ but the title actually comes out as "At"rt.

No, Patroclus, she's saying "At least I'm not as ball-achingly tedious as Will Carling."

I was all prepared to be chuffed by that, GSE, until I realised that at least 50% of the post is given over to Mr Klee.

nonono - I meant the brilliant combination of art and new media knowledge, that's all
*grovels and squirms a bit*

I was always a sucker for a bit of Paul Klee.

Surely, that's a painting of a table-tennis match.

Somebody in town here, deep in the wilds of Washington state, has been tattooing Paul Klee backpieces. I've seen three of them so far, gorgeously rendered things...and just last month I went shopping at the bookstore and the man handing me my change had a full Klee forearm. This has nothing to do with Twitter, of course. I just thought I'd mention it.

I think possibly what you really are is the King of Juxtaposition, Tim...

But that is no mean feat.

Don't squirm, GSE. It was nice, what you said. Thank you.

I never really fancied a tat, FN, but that sounds rather splendid.

Ooh, I like that, Valerie. If not a creator, a curator.