Transnational Psychogeographic: or, Please do not read the lyrics whilst listening to the recordings

Declaration of interest: I was at university with Zoë Skoulding, more years ago than either of us might like to mention. We both hovered on the fringes of various artistic escapades. She was a wry Alice, not explicitly mocking the wannabe Wonderlanders who really thought Thatcherism could be toppled through energetic, black-clad mime, although if you caught her eye at an unguarded moment, the truth was in there. And I just twatted around with cut-up bits of paper, waiting for The Great Dada Revival in the same way that some people today await the Second Coming and/or Sarah Palin. Zoë concocted a fabulous mural at one end of the Nelson Mandela lounge; I delivered a rambling narrative performance that explored the psychedelic undertones of nuclear apocalypse in a manner that owed much to Bob Dylan, but in retrospect, more to Bobby Davro.

So I hope you'll forgive me if I don't offer an objective review of her latest collection of poems, or of the CD by her band, Parking Non-Stop. Instead, all I can offer is reactions, responses, the things that come into my head. Which is a review of sorts, I suppose; just don't expect coherence or conclusions.

And my initial reaction to Remains of a Future City is that I've forgotten how to read poetry; I don't understand it. This is deeply embarrassing: not only did I study it at a supposedly advanced level, I wrote reams of the bloody stuff as well. I find myself responding to the poems like a trainspotter: for example, 'Columns', five pages of text in tall, thin, justified slabs, reminds me of a similar trick that one of the Metaphysicals played; I think it was George Herbert, but it may have been Marvell or Donne; Zoë would know; but should you really approach the subject of a review (even if it's not a review) to provide a crib sheet. And talking of crib sheets, there's a final page that explains some of the more abstruse allusions, namechecking Borges and Vitruvius and the German noiseniks Einstürzende Neubaten and the Situationist Ivan Chtcheglov; and Eliot's notes for 'The Waste Land' ("...any who think such elucidation of the poem worth the trouble") come to mind.

And then I realise that I've got this whole thing arse over tit. Even when I was studying poetry, poking through the droppings of Wyatt and Pope and Keats and Heaney in search of the bone fragments and seed casings that might tell me what they'd had for breakfast, I never understood it when a poet was praised for his or her "clarity". I want clarity when I read the instructions on how to put together a flatpack bookcase, not when I'm peering into someone's soul. 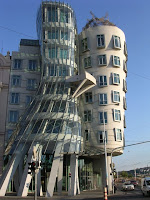 So, start again. Feel it, don't think it. Skoulding's poems are about The City; not a specific city, like Eliot's London or Joyce's Dublin, but fragments of the specific and the imagined that come together to form a concept of urban-ness, a quiddity of city. Often it becomes sentient, organic: "in the curve of the skull/ above the spinal colonnade" ('Temple'); "light contamination/ disappearing down a/ white throat" ('Airport'); "deep in the creases/ of lungs an interior/ surface like raised hands" ('From Mont Royal'). Post-1989 Europe is laid out upon a table like a patient who couldn't afford ether, and the surgeon doesn't know whether to reach for Gray's Anatomy or an A-Z. There's an echo of Thomas Hardy, but the novels not the poems, the sense of environment being the central character in the drama of life (which gives me an excuse to point you backwards to the post I wrote about The Wire, and to realise, aghast, that it was over a year ago.)

Hang on - is this literature about cities, or literature about literature about cities? Ah, what the hell, if I'm really going to get my allusions from the literary remainder shop, I can point to Ishiguro's The Unconsoled, where the unnamed city finds itself too weak to be a nightmare, but contents itself with being a particularly annoying dream; and let's linger for a few seconds in the vicinity of OK Computer-era Radiohead; specifically 'The Tourist', a reproach to people powering their way through Europe so quickly they don't notice it; and the rather more obscure 'A Reminder', with its background white(-ish) noise lifted from a Prague railway station.

Which offers a good excuse to transfer attention to Zoë's band, Parking Non-Stop. Once again, the explanatory notes are part of the fun. PN-S don't have a drummer, but they get their backbeats from recordings made as the meander between their Welsh base and some of the more atmospheric regions of Northern Europe, so credits go to such percussive neophytes as a bison on the Poland-Belarus border, Slovakian woodpeckers, and a nautical winch in Llanfairpwllgwyngyllgogerychwyrndrobwllllantysiliogogogoch (and I bet that looks ugly in Blogger's layout).

This is more than just a stack of field recordings, though: fragments of Zoë's texts drift in and out; and the found rhythms form a bedrock for odd, slightly retro, melodic noodling, overlaid by echo-laden, occasionally Nico-ish vocals. I'd like to call it Stereolab with a head cold, but that probably sounds like a bad thing; in my sonic universe, it's anything but.

Maybe it's the sound that gives emotional context, in a way that raw words don't. Maybe rock 'n' roll speaks to the corner of my brain that poetry can no longer reach. Which rather contradicts that old saw, variously attributed to Laurie Anderson, Elvis Costello and Frank Zappa, that suggests writing about music is like dancing about architecture; which in turn, raises the question of how to write about writing and music about architecture. Or, indeed, how to dance about it. Which calls, surely, for an expression of the urban psyche through the medium of movement, which might sound like the sort of thing that Zoë and I used to do 20 years ago, but could just as well look like this:

Ooh, I enjoyed reading this, I do like stuff about cities, and it's made me remember to order this book, which I keep forgetting to do.

Also Einstuerzende Neubauten is a fitting description for that picture you have there (not Paddington).

I don't remember Zoe Skoulding, though - she must have been before my time. But then I was a deeply unsophisticated type in those days (still am) and would probably have eschewed your/Zoe's multimedia performance for a Carter USM gig and drinking six pints of Murphy's through a succession of Bacon Wheat Crunchies in the Ram.

Ordinary mortals can appreciate a nice allusion or an evocative turn of phrase but I think you have to be a poet to actually 'understand' poetry. Still I'm sure Zoe will be happy with your post-modern approach.

i'm going to have to look at this again later. bob dylan and bobby davro in the same sentence, and i'm totally derailed! wish i could have seen it!

Zoe was in my year, on my course, Patroclus, so she would have left just before you arrived. I favoured Courage Best and cheese pasties, btw. But six pints is about right. Jesus, I couldn't drink six pints of milk these days.

Dick: Apparently there are more writers of poetry than there are readers. I'm sure I can work that up into some kind of statement on futility if I try hard enough.

Whilst we're being all high art and all, I followed your link to Herbert, only to be greeted by Dowland. Gosh, it seems like only yesterday Sting was on SNL with this lute, plugging the master.

And it looks like you were suffering from a bit of the Wimsatt-identified Intentional Fallacy--but you got over it. Good man.

Or, as Barthes called it, the Death of the Author. I always preferred the post-modernists to the New Criticism, because the former didn't insist that you actually read the text before pontificating on it...