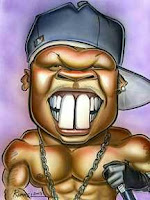 The popular and successful rap singer Mr 50 Cent has, we are led to believe, made another motion picture. Unfortunately, the intended title of the movie was to be Things Fall Apart, which rather annoyed the Nigerian author Chinua Achebe, seeing as how he wrote a fairly well-known novel with that name a few decades back. The rapper’s lawyers have explained that “the novel with the said title was initially produced in 1958 (that is 17 years before 50 was born),” (always the get-out clause of dim people on TV game shows) but Achebe has insisted that the title must be changed, to avoid any possible confusion.
Which might provoke a certain degree of amusement among fans of WB Yeats, from whose poem The Second Coming Achebe borrowed the phrase in the first place.
Posted by Tim F at 7:35 am

At least they managed to get some change out of 50 cents.

If you shake him, Rog, he jingles.

Yes there is, Geoff.

Thanks, BWT. Trying to do Marilyn Manson > John Betjeman, with less luck.