Society of the spectacles 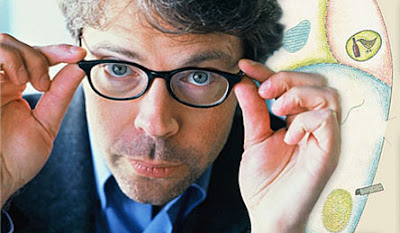 When Jonathan Franzen’s publishers announced that thousands of copies of his novel Freedom would be pulped after the wrong version was printed, the dials on my cultural bullshit detector immediately flipped into the red. It’s just the sort of story that liberates an author from the high walls of the review sections, and into the news pages, where normal people might go. It’s an amusing cock-up story, but not one that reflects badly on the writer himself; a bit like that time when Jeanette Winterson’s manuscript was left at Balham Tube station.

But the next événement to spice up the drudgery of Franzen’s UK promotional tour was at the same time too banal and too weird to have been dreamed up by some fresh-faced catamite in the Fourth Estate PR department. At Monday’s launch party, someone swiped the poor man’s glasses from his nose, dropping off a ransom note at the same time. The location of the attack (the Serpentine Gallery) and the preposterous demand (£100,000 to you, guv) immediately suggest some sort of neo-Situationist prank, probably carried out by art students.

But no. The spec-snatcher, James Fletcher, is indeed a student, but a student of computational aerospace design. Any aesthetic motivation appears to have been subconscious, as he wrote afterwards in an article for GQ:

Some articles have suggested that the theft was perhaps a display of some kind of art... I’d just like to comment that if art is defined as something which provokes an emotional response, then I suppose it was art.

Instead, the attack seems to have been motivated by far more mundane factors:

We sat drinking excessive champagne for a while and talking to some of the guests there until I realised just how dull it all was... I’d mentioned several times to my accomplice how much I admired Franzen’s frames... I remember shouting as I snatched the glasses off the bewildered man's face that I was with Channel 4 doing a comedy stunt. Looking back, I’m not exactly sure what that meant or why I said it.

All in all, then, a terribly 2010 manifestation of artistic outrage: a combination of drunkenness, boredom, material avarice and the incoherent, atavistic desire for some kind of fleeting celebrity, however ill-defined. It’s the sort of thing someone should write a big fat novel about. What’s Jonathan Franzen doing these days?
Posted by Tim Footman at 3:49 pm

I think Mr Fletcher is now claiming to have been framed.

Sounds like we've got another Dadaist on our hands.

I bet he wouldn't dare go for Jonathan Meades' shades.

You've surpassed yourself. Plus I thought only I ever used the word catamite. Good show.

Caught by the long arm of the law, Rog.

The border between Dada and prat has always been fuzzy, MWB.

He couldn't, Geoff. They're fused to JM's face.