One of the more difficult by-products of the UK Government’s recent spending review has been that everybody’s been forced to talk about social class again. As a public conversation it’s embarrassing enough, but it’s further complicated by the fact that no two people can agree on the precise vocabulary, or what it means. So the Guardian and Mirror argue that “the poor” will suffer the most; while the Mail and Telegraph chronicle the indignities to be endured by “the middle classes”. Clearly there is some sort of connection between income and socio-economic status, but it’s pretty hit and miss; think of anomalies such as poor, middle-class vicars and wealthy, working-class builders. The slightly ghastly sounding Middle Class Handbook classifies the tribe as those earning between £30,000 and £200,000, whereas the average income in the country is closer to £25,000, which suggests that in financial terms at least, the middles are somewhere near the top. Maybe we should just call them the bourgeoisie and shoot them all and be done with it. 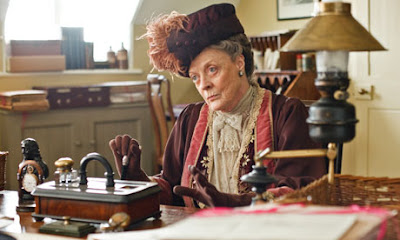 One almost yearns for the years when everyone had a defined station in life, and stuck to it, as depicted in that epitome of guilty pleasure, Downton Abbey. Julian Fellowes, the creator of the show, has something to say regarding those who have found fault in its historical verisimilitude:


The real problem is with people who are insecure socially, and they think to show how smart they are by picking holes in the programme to promote their own poshness and to show that their knowledge is greater than your knowledge... The fact of the matter is that the really posh people are pleased to see something on television that isn't about a dead prostitute in a dustbin, and they seem to just be enjoying the programme.

Thanks, Julian, that’s explained everything. Although, as some have cruelly pointed out, Fellowes is married to a lady-in-waiting to Princess Michael of Kent, which makes him about as classy as a Big Brother contestant puking WKD over her Burberry tracksuit.
Posted by Tim Footman at 12:20 pm

Thank you. I believe he also wrote speeches for IDS. Those are just as memorable as his Sunday night drivel.

How uncanny Timster - a work colloeague and I were just having almost exactly the same conversation about (a) how social class is suddenly back on the agenda and (b) Downton Abbey. Sadly, I'm no position to comment on the show as I haven't seen it before (doesn't normally stop you Bob - Ed.) But I *have* gunned down *many* a member of the haute bourgeoisie and I have to say I'm ever so pleased that you're coming round to my view on such matters!

(Can I get down from table now, Mater - Whitechapel's just about to start and I'm worried I might miss the bit at the beginning where they discover the dead body of a Tom in a municipal wheelie bein....)

I write as a poor* clergyman from working-class roots, but with aspirational parents.

I have nothing to add.


*I speak financially, not as some kind of self-assessment of my ministry.

Bob: I suspect if such an eventuality occurred at Downton Abbey, Maggie Smith would make the agitators disperse with just one of her looks.

No changes there, Charles.

But you're also a builder of sorts, Dave, which confuses matters greatly.

One problem is that the middle class is nearly gone, yet everyone wants to believe they are part of it, whether they are really in the "poor" or "working class" categories or the "upper middle" or "well-to-do" categories. NPR just did a program on this recently and discovered that everyone -- from $20,000/year to well over $200,000/year -- thinks they're middle class.

Sorry, I meant to say "NPR did a program on this in the U.S.," but that's probably obvious. I think the problem is rampant in the First World, though.

… which is making me wonder now whether 'middle class' is just a transient social phase between feudalism and corporatism.

"But I got a particular twinge of regret when I saw that Spinsterella has chosen to hang up her bitter, twisted, endlessly entertaining sword. She (along with Bob Swipe, Patroclus, Slaminsky and a few others) was one of the first people to take notice of my self-indulgent rambling"

How quickly we forget, eh?

Valerie
As I understand it, the US view of class is almost entirely economically based so you move between classes depending on income on wealth. It's a lot more complicated in the UK, being largely about things you have no control over such as what your ancestors many generations got up to. You can be exceptionally wealthy and still working class (Wayne Rooney)and utterly impoverished and still middle or indeed upper class.

The only really permeable class is the middle class. Hardly anyone want to identify as middle class though as it means you are either stuck up or alternatively horribly infra dig social crawlers, depending on who is looking.

True, Valerie. If everyone's middle-class, then nobody is. It's a default position.

They don't shoot themselves in the foot, Geoff, they get the Slovenian cleaner to do it, then mop up the mess.

Class in the US is more money-based than it is in the UK, GSE, but I'd say there are still other indicators (where you eat, what books you read, etc) that can mark you out. I mean, Sarah Palin's wealthy, but is she classy?

Oh dear, reading your blog, I've just discovered I am working class. Excuse me when I sit down and have a cup of sweet tea.

Re Downton Abbey, Mr Fellowes has a point. On the other hand, it is not just snobs who point out the historical inaccuracies but those like me who would like to see the historical 'experts' on the series taking more pride in their work and making this a classic series for all time, which I am sure Mr Fellowes would also like to live on after him.