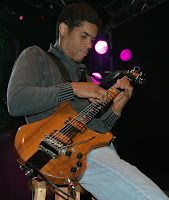 I remember the excited register of the sleevenotes on one of Stanley Jordan’s early albums: something along the lines of “your ears do not deceive you – there is only one guitarist on this album!” This was a reference to his startling tapping technique, which enables him to play two separate melodies at the same time. If you didn’t know better, you’d think there were indeed two guitarists on the record, or maybe one guitarist, double-tracked. The question was whether one’s listening pleasure was at all enhanced by the knowledge that the sound came from one man, playing one guitar, once. On this, I was something of a sceptic, never really buying the notion that there’s a direct correlation between technical aptitude and good music. Jordan is clearly good, but is the noise he makes really better than that made by someone only playing one tune at a time?

But the best moments – the stuff that actually transcended pure admiration for his agility and had me revelling in the noise he was making – were the most straightforward: a hard-bop rendition of ‘Autumn Leaves’; and a coda to ‘Eleanor Rigby’ that became a blur of Townshend riffing.

“It’s because you don’t play the guitar,” said Small Boo. “You don’t understand.” And it’s true, I don’t play – although I understand the basics, what the right and left hands usually do – and she does. But should that really matter? The gig was sponsored by a guitar magazine, which was also pimping a concert in a few weeks’ time by some godawful US thrash outfit. I’m sure lots of people would have tickets for both. The attraction, it seems, is not jazz or rock, but what someone can do with a guitar; the playing, not the music.

Two thoughts. First, Nick Hornby’s comment on the disproportionate number of novels about writers, urging readers to “resent the repeated implication, by publishers and books pages, that my profession is more interesting than yours.” If someone like Paul Auster is writing about writing, is Stanley Jordan playing the guitar about playing the guitar?

And then, about Les Paul, the first man who worked out (through his innovations in multi-tracking) how to make one guitarist sound like several. Here’s the two of them together. Jordan’s playing is clearly more complex, more unorthodox, more technically challenging, and I wouldn’t dream of suggesting that Paul’s stuff is better; but I’m damned if I can see that it’s worse.

This is the difference between music and musician, adoration and admiration.