A few words about gay marriage 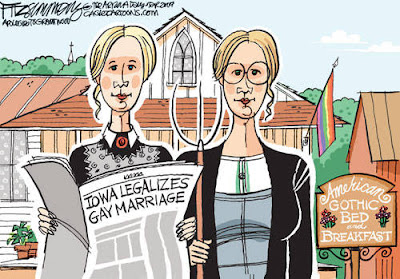 I don’t think I’ve made any particular reference to gay marriage in this blog before, mainly because I didn’t see much point. I mean, I’ve long assumed that the whole thing would just trundle into existence eventually, to a few bleats of outrage and then within a matter of years we’d look back on the days when consenting adults weren’t permitted to marry someone of their own gender with the sort of bemused horror we now reserve for bear-baiting or child chimney sweeps. But apparently not. It seems that David Cameron is under pressure from Conservative constituency chairmen to abandon the whole idea.

I’m also baffled by the opposition coming from the Conservative Party. My hazy grasp of modern political philosophy tells me that Conservatives (see Republicans, right-wingers, etc) favour freedom as their guiding principle. Labour (Democrats, the left) lean towards equality. Many ideological clashes occur when these two great principles come into opposition. So you’d think that a law change that offers both freedom and equality would meet with rousing acclamation on both sides of the house. Apparently not.

Now, one argument against gay marriage that I do encounter is that it offends the sensibilities of various religious groups. Well, that’s a pity but, you know what? There are probably several thousand things about the modern world that offend me: reality TV; the smell of Kentucky Fried Chicken; fake tan; people who say “less” when they mean “fewer”; the brain-dead loudness of most action movies; my own increasingly saggy and decrepit reflection in the bathroom mirror. To be honest, I also get pretty offended by the inane platitudes of a lot of the aforementioned faith groups, and I’ve never quite understood why my aesthetic prejudices are less deserving of protection than their supernatural taboos. But it’s a modern, complex, interconnected world, with all the mess and noise that entails, so I just do my best to avoid KFC and my face and religious fundamentalism; and when such encounters are unavoidable I grit my teeth and remind myself that there are other, more delightful things around the corner that might compensate for the temporary glitch. Maybe those who oppose the idea of gay marriage because an old man in a dress tells them to could follow my example and just try to ignore it. It won’t go away, but you may find that it stops bothering you if you stop bothering it.

And it’s become something of a cliché, but that doesn’t mean it’s not true: if the idea of gay marriage offends you too much, maybe you should try to avoid marrying a gay person.
Posted by Tim F at 7:19 am

Really enjoyed this post. Well put, and pulled some of the things that had been blundering around my subconscious for a while into clear verbiage. Thanks.

Hey Tim, I'm also bemused by opposition this topic. In the UK, religion is largely irrelevant as a political force, but hatred and narrow-mindedness isn't. Go us! Anyway, who cares who gets married? So long as they can be as equally miserable as a straight married couple and eventually go through the grinding misery of a complicated divorce with their adopted kids, I say it's all fair and good. Indigo

Thanks, Valerie. Nothing new to say; just needed to vent my incomprehension.

Yes, the equality of misery argument, Indigo. Of course, a "traditional marriage" doesn't countenance divorce either, but the campaigners tend not to mention that...

I absolutely agree with you... And so does my wife.