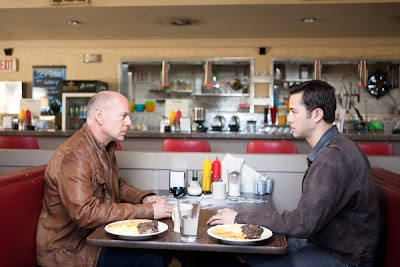 So I saw Looper at the weekend, and it was pretty good, I thought. Clever concept, good acting and although there were effects, they were used sparingly, to legitimate ends, not simply for cheap thrills. I’d heard a bit about the make-up work that supposedly helps us to believe that Joseph Gordon-Levitt and Bruce Willis are the same person, but to be honest, it just made me think that Joseph Gordon-Levitt was wearing a funny nose, so he looked a little bit less like Joseph Gordon-Levitt, but not noticeably more like Bruce Willis. I did like the diner scene, where they sat staring at each other as if they were in any number of films in which one actor plays two roles and – through the magic of split-screen or some such jigger-pokery – confronts himself. Ideally, of course, they’d have made use of the technology depicted in the film and sent an older Gordon-Levitt back from the future; or pulled a younger Willis forward, whichever is cheaper.

But is it just me, or do films these days tend to be more about other films than about people or things or ideas? Of course, this doesn’t mean that the director is consciously borrowing from other film-makers, or paying homage or spoofing or – heaven forbid – ripping them off. To be fair, Rian Johnson doesn’t set out to be the cinematic answer to DJ Shadow or The Avalanches, concocting art almost entirely from samples of other art; it just feels that way. The author dies as soon as he signs off the final edit; this is all in the reading.

So in Looper I spotted thematic or stylistic elements of, in no particular order: The Omen; Carrie; The Terminator; A Matter of Life and Death; North By Northwest; Twelve Monkeys; The Sixth Sense; Mad Max; The Matrix; Léon; The Usual Suspects; Source Code; Back to the Future; Blade Runner; Tomorrow I’ll Wake Up and Scald Myself with Tea; not to mention a fat handful of Doctor Who stories (say, Genesis of the Daleks, with its killing-baby-Hitler parable, City of Death and The Angels Take Manhattan). Oh, and given the fact that the only women in the story are reduced to the archetypes of wife, mother, servant or whore (or combinations thereof), sexual politics straight out of Mad Men.

I am quite ashamed at myself, for being such a unobservant film-goer. Especially when I studied film. I didn't notice, for example, that he was wearing a false nose until reading the reviews afterwards. I just thought he was wearing lots of makeup and looked a bit odd.

I also didn't get why one of the runners was becoming mutilated as he was running away, and had to have it explained.

Re: the sexism, I thought it was meant to be an aspect of that kind of society - it had a sort of 40s film noir-ish, sci-fi Bladerunner feel where the only roles available for women were strippers or mothers. Though within that, I thought that Emily Blunt's character was quite kick-ass.

But maybe I'm just so used to Hollywood being sexist I don't see it anymore. When you think of real strong film noir women like Gilda, it seems we've gone backwards...

Emily seemed to be kick-ass, Annie, until we discovered her shotgun was loaded with rock salt...