Bruce Norris, the author of the play Clybourne Park, has refused to allow his play to be staged in Berlin after he discovered that one of the African-American characters would be played by a white performer in blackface. Meanwhile, the Royal Shakespeare Company has come under fire when it emerged that the Chinese play The Orphan of Zhao would be performed by a mostly Caucasian cast.

Meanwhile, a glance at the credits for Baz Luhrmann’s much delayed movie version of The Great Gatsby reveals that the corrupt Jewish businessman Meyer Wolfsheim will be played by Bollywood legend Amitabh Bachchan. But he doesn’t white up. So that’s OK. 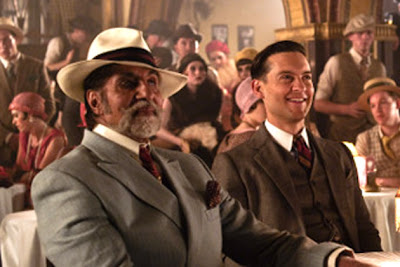 PS: Accusations levelled at Cloud Atlas as well. Such larks.

PPS: Tom Sutcliffe covers similar ground in The Independent
Posted by Tim F at 8:32 am

What an intrigingly thorny problem. The Semites and the Indians are both Asiatic peoples, but then most whiteys speak an Indo-European language. I do hope Luhrmann gets Bachchan to dance a bit, it could yet be an inspired casting choice for a Jazz Age film, and I'm sure he could manage a bit of klezmer.

Is it okay because Indians and Jews are both ethnics? I can't tell any of them apart from one another, anyway!

I have no problems with AB in the role Gadjo; but I believe objections were voiced when it was suggested that Dustin Hoffman might be a good choice to play Gandhi. Just sayin'.

I would have thought his experience in his role in Tootsie would have made him the ideal choice to play Indiri Gandhi.