Tomorrow I'll Wake Up and Scald Myself With Tea: 30 years on

Huge chunks of what I know and love about movies I owe to BBC2. Younger readers may not believe that the channel was once something other than a repository for antiques shows, cookery shows, quiz shows and combinations thereof but in the days of three analogue channels and that’s yer lot it was a trove of unexpected gems. There was still a Reithian educate-and-entertain meme in the programming, so they were big on themed seasons that gave an overview of a particular genre or period: over successive Saturday nights I’d watch the Warner gangster movies with Cagney, Bogart and Robinson; the Astaire/Rogers musicals from RKO; contrasting double bills of a Universal horror movie from the 1930s and a Hammer equivalent from the 50s/60; or they’d get the auteur bug and give you a couple of months of Buñuel or Wilder.

But the real joy came when you came across a movie of which you knew absolutely nothing, that had no connection with what came before or after, that just seemed to be thrown into the schedules on a whim. This was pre-Wikipedia, pre-IMDb, remember; all you had to go on was what the Radio Times told you (unless it was in Halliwell’s Film Guide or Elkan Allan’s Movies on TV, the only other references I would have had to hand). So I was rather under-prepared when, at the age of 13 and a half, Auntie presented to me a Czech film,  Jindřich Polák’s 1977 science-fiction comedy Zítra vstanu a opařim se čajem, aka Tomorrow I’ll Wake Up and Scald Myself With Tea.

I’ve mentioned this experience – not just the film, but the fact of catching it by chance on a winter weekend in 1982 – to many people over the years. Most of them respond blankly, presumably because they were doing what people were meant to do on a Saturday night in 1982, drinking sweet cocktails to a soundtrack of the Human League. Or maybe they were watching the football. But every once in a while I find someone who was about the right age and the right level of social ineptitude to have been on the sofa, watching the only minority channel going. They usually offer that face of bafflement easing into vague recollection, followed by a specific aspect of the film suddenly leaping back into their consciousness after all this time. “The twins!” “The green faces!” “The comedy Hitler!” I wouldn’t say I’ve consolidated lifelong friendships this way, but there’s a tenuous network of geeks and losers who now understand they weren’t alone, united as they are in a sort of extended water-cooler moment across the decades.

The only reason I know the solid facts about that fateful transition (that it was on Saturday January 16 at 9.35pm, and so on) is that they’re laid out in this review of the DVD, from 2006. As soon as I read it, I felt an urge to get hold of the disc, but at the same time a certain reluctance. Although my 13-year-old self loved the film, something told me that the 40-something me would immediately realise it was a bit crap. So I held off. Until, a few days ago, I happened to come across the whole bloody thing online. And I gave in. 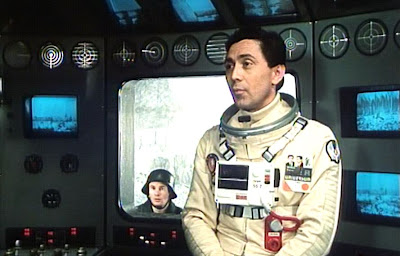 OK, here’s the basic set-up. In the 1990s (or a mid-70s imagining thereof), time travel is a feasible leisure activity and a group of fascists decide to use this to go back to 1944 and give Hitler a hydrogen bomb. They bribe a pilot on one of the time flights to help them; he lives with his identical twin, a scientist who was responsible for developing the technology. On the day on which the trip is scheduled, the pilot chokes to death on his breakfastl; his brother, who knows nothing about the plot, dons his uniform and goes to work in his place.

Well, it wasn’t quite as good as I’d remembered, nor nearly as bad as I’d feared. The budget was evidently tight and the effects now seem primitive, but that’s never bothered me too much; I still enjoy episodes of Doctor Who and Blake’s 7 from around the same time. Polák clearly assumed that the 1990s would look much like the 1970s, but with a few hi-tech innovations thrown in, so flares, fedoras and kipper ties abound alongside the aforementioned time travel, and also washing-up liquid that simply dissolves the dirty dishes. I remember being stunned at the audacity of playing Hitler for laughs (as distinct from something like The Producers, which played *the idea of Hitler* for laughs) but we’ve been through so many Downfall spoofs these sequences have lost their impact. That said, the casting of the historical Nazis is spot on; Goering and Goebbels in particular look just right. And allowing Hitler to converse with a pair of Chicagoan time tourists by having them both speak fluent Czech presents no problems; in my world, Daleks and Zygons and the Sevateem all spoke English.

I must have been so swept away in 1982 by the weirdness and audacity of the premise that I failed to pick up on some fairly contrived bits of plot, such as the anti-ageing pills that a Nazi officer takes to remain pretty much unchanged 50 years after the war. And it’s never properly explained why Jan, the sweet, clumsy scientist, immediately assumes the identity of his amoral brother Karel; there are elements of resentment and jealousy at work (Jan carries a torch for at least one of Karel’s several girlfriends) but the switch seems to be driven by the need to set up a situation rather than arising naturally from the action. The relationship between the two brothers is evidently dysfunctional, but would Jan really be so blasé about Karel’s sudden demise? Other incongruities don’t even have a reason for existing: why, for instance, would a Nazi have a black secretary? And if you’re going to set up a bit of slapstick by the contrivance of having a trampoline on a roof, at least make the ensuing carnage somehow worth the effort.

What does feel uncomfortable – something that would have passed me by 30 years ago – is the political subtext. In this version of the 90s, the Berlin Wall didn’t come down and, we assume, Czechoslovakia never split in two; the last we see of the pro-Hitler plotters, they are being driven away, presumably left to the tender mercies of the Communist authorities. The film was made less than a decade after Warsaw Pact tanks rolled into Prague; are we to infer that a plot to hand the H-bomb to Stalin in 1944 would have been perfectly OK? And the final twist, which I won’t give away, almost steps over the line between black humour and pragmatic callousness. Only the excellent, understated performance by Petr Kostka (as Jan/Karel) stops things from getting too icky.

What still works, after the sometimes clunky exposition of the first half, is the insane confusion of the conclusion, with characters returning from the 1940s to a time just before they left and thus populating Prague with several versions of themselves. Again, I was already attuned to temporal paradoxes and multiple realities but Polák pushes the idea far further than I’d ever imagined possible, while still keeping things under control; it’s always clear to the viewer which model of each character is which. 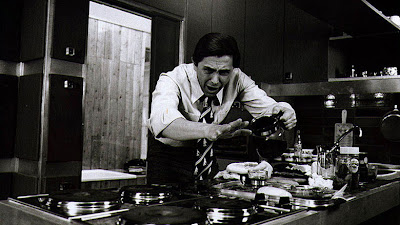 Beyond the merits of the film itself though, there’s the whole issue of how we see films now. Sure, Polák’s work is far more available to people who might want to see it, anywhere in the world, whenever they want, whether or not there’s football going on elsewhere. But according to the counter on the video site, fewer than 1,500 people have taken advantage of such an opportunity; whereas back in January, 1982, several hundred thousand did so, even though they were forced to do it at a time when the BBC2 schedulers demanded. And if I hadn’t seen it 30 years ago, I probably wouldn’t have done it again this time. And this time, I can’t go into school on Monday morning and say “Bloody hell, did you see that bizarre film with the Nazis and the green faces?” in the reasonable expectation that maybe two or three people might have decided not to watch the football.

If it was on BBC2 it was probably a documentary. Of course, the possibility of time travel exists, its just that they don't tell us about it.

Thank you for posting this. It’s exactly what I was looking for!
toko baju muslim