Georgia Ford and the unforced error of Twitter fame

As gawky Spider Man doppelganger Andy Murray wielded his claymore in the vague direction of the Swiss Tarantinobot, a young woman in Sunderland by the name of Georgia Ford asked a question:

Is wimbledon always held in London?

Unfortunately, she asked it on Twitter and within minutes it was being RT’d around the planet; last time I looked, about 5,000 times. Ms Ford was clearly embarrassed; she mustered some admirable Mackem defiance, but her unwanted fleeting celebrity was evidently too much and she deleted her account.

That was when the sanctimonious finger-wagging kicked in:

Anyone who abused @Georgia_Ford for a simple mistake need to have a long hard look at themselves. Sort yourselves out for goodness sake... Why would anyone be mean to her?? It was cute!... theres a line between banter and abuse... Can people stop being horrid to @georgia_ford please. The tweets may have been more than a tad amusing but no excuse to be mean to her!?... To the pitiful excuses for human beings that hounded Georgia Ford from twitter. Every moment of your life will be under scrutiny….from me... I wish that @Georgia_Ford had not been shamed into deleting her Twitter account. Time for those who mocked her to eat some crow...  @georgia_ford if you're reading this then ignore the haters and hold your head high. x... I miss Georgia Ford.

...and so on. Now, I don’t know whether it was the sheer volume of responses that persuaded Georgia to shut down, or one particularly vitriolic message in particular. As far as I can see, the vast majority of the RTs were unadorned with anything apart from the occasional raised eyebrow (or emoticon equivalent thereof). And I know online bullying is a serious problem, especially when one person is singled out by a pack. But this wasn’t some sort of Twitter Borg acting in unison; it was just something that lots of people independently thought was funny, and was thus passed on to some more people, and so on and so on. The Huffington Post sprang to her defence, but in doing so they had to mention the original tweet, surely compounding the original problem.

A journalistic myth has appeared in the last few years, about “Twitter lynch mobs” and “concerted Twitter campaigns”. I’m sure these things exist, but more often than not, they’re the result of a large number of people independently coming to a similar opinion about something. It’s not much different from lots of people liking a catchy song and humming it, or lots of people laughing at joke on a TV show and retelling it to their friends. It’s very sad that Georgia Ford felt the need to leave Twitter, but what do her erstwhile defenders want? The next time someone asks a silly question, we should just grit our collective teeth and act as if nothing happened? That wouldn’t just harm Twitter, it would bite a huge chunk out of modern culture and discourse.

And now, back to the tennis. 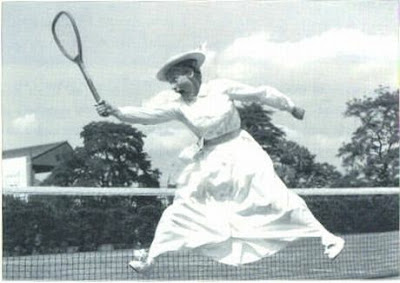 She's probably a perfectly lovely girl, but I'm not going to complain about one less simpleton on Twitter.

Apparently Piers Morgan weighed in mocking her. Which is enough to make me on her side.

If they were going to boot a simpleton off Twitter, I'd rather it was Piers. Countryside and all that.