Still not sure about the big baby: a few more thoughts about the Olympic ceremony and that

Some stuff that should probably gone into the previous post.


1. Previous opening ceremonies either dutifully toed a political line (Berlin 1936, Moscow 1980, Beijing 2008) or expressed a prevailing zeigeist (Los Angeles 1984, Sydney 2000) that happened to tie in quite neatly with what the government wanted saying anyway. If Boyle’s efforts were truly subversive, was he just expressing a general mood that stands in opposition to what Cameron et al want Britain to be? Ai Weiwei liked it, which makes one wonder how many flavours of excrement would have hit the fan had he been in charge four years ago.

2. That said, I’m still slightly confused about the whole Industrial Revolution thing. Some right-wingers, claiming the whole thing was a leftie plot, have suggested that the event presented Brunel and co as evil, rapacious capitalists intent on tarmacking over Merrie Englande, whereas Boyle’s collaborator Frank Cottrell Boyce says that the huge technological upheaval was one of the “things we loved about Britain” and wanted to celebrate. I suppose it does expose the incoherence of English conservatism, yearning for an idealised, quasi-pastoral past while lauding the entrepreneurial spirit that wiped it out.

4. For some reason I keep thinking back to that poor man who died at Tate Modern last week and the rumour that some people initially thought it was a piece of performance art. If something hideous had happened during the ceremony, how soon would it have been before someone twigged? And would it be appropriate to quote Bill Shankly?

5. Not directly related to the ceremony, but anyway: the empty seats fiasco; and the problems in TV coverage of the cycling being blamed on excessive Twitter use. Do people still need to attend sports events in person? Do they still even need to see them on TV? I didn’t watch the opening ceremony live, but I followed it on Twitter. In 20 years’ time, will athletes be fencing and diving and underclad-volleyballing in near-empty stadia, accompanied only by the tap-tap-tap of a few accredited live tweeters? 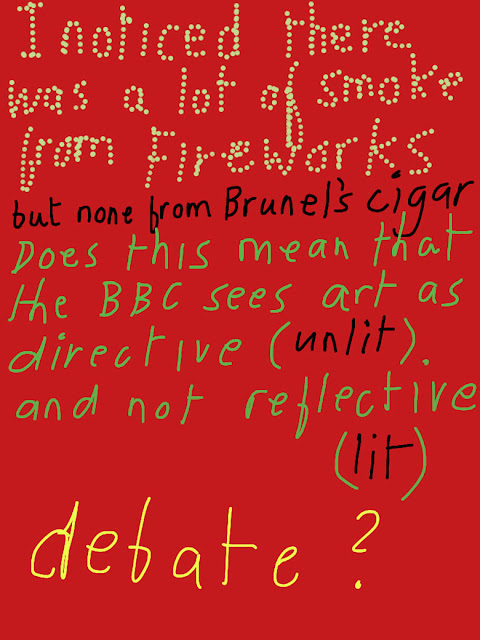 We have talked about this before.
Do NOT read the Daily Mail.

Last time Vicus posted a link to a Daily Mail article I read it and wished I hadn't. Not making that mistake again.

But the ceremony did display the splendid contrariness of British attitudes. I know so many people who carefully recycle every last scrap of paper and never let the tap run but wouldn't dream of doing without at least two overseas holidays a year, who talk about saving energy but have numerous appliances running all the time and keep their houses at a temperature that means they go bare-armed all year round. Saying one thing and doing another is what we do.

I didn't get a particularly subversive whiff off the whole ceremony though. A bit of this, a bit of that - it just was. And was mostly jubilant (apart from the very well done memorial part).

To be truly subversive, they'd have had Michelle Smith passing the torch to Christine Ohuruogu.

(Ah just remembered - would have liked to have seen a bit more of Daley Thompson, Mary Peters etc doing their wee handover. They were a bit blink and you miss them.)

Is it OK if I just look at the pictures, Vicus?

Z: Maybe we should have powered the whole ceremony from Wiggo on a stationary bike.

BWT: I thought Boris was so insistent that it wasn't a leftie ceremony, it bloody well must have been.