Carping about the Daily Mail is as easy and pointless as throwing confetti at a rhinoceros but that doesn’t mean you shouldn’t do it. And this time it’s (very tangentially) personal.

A few days ago, the Mail ran an article about Carole Middleton, the mother of the woman who is married to the Queen’s balder grandson. It’s a rather snotty, sneery piece, focusing on her “little social weaknesses” – which is odd because I would have thought Middleton’s story (one-time air hostess who made something of herself) matches the Mail’s default readership profile, or is at least the sort of narrative to which they aspire. But I don’t want to add to the reams that have already been written about the paper’s extraordinary ability to persuade women to read articles that tell them how vile they are. 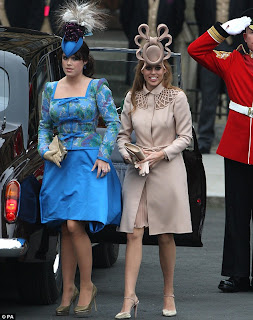 No, the real problem comes a few paragraphs in, when the article’s author Paul Scott suddenly starts discussing one Tim Atkinson who apparently “writes a regular blog for the Party Times” (the website of the Middletons’ hugely successful business). In his blog, Tim occasionally pokes gentle fun at the royals and, on this occasion, mused about that batty Palace directive that Kate Middleton should curtsey to the offspring of Prince Andrew, her husband’s cousins, the gormless-looking ones with the bizarre headgear that looks like beige fallopian tubes. Scott quotes the post’s headline – “Sister of woman with nice arse officially inferior to Beatrice and Eugenie” – which began life as one of my tweets and which Tim A very politely asked if he could borrow, because he’s got good manners. See, I told you it was all a bit tangential. I thought the Mail asterisked words like “arse” though, preferring “derrière” or “posterior”. Apparently not.

Anyway, Tim Atkinson doesn’t write a regular blog for the Party Times. Whoever puts together the Party Times has chosen to link to Atkinson’s blog. Scott does actually mention that the offending screed “appears on the tackily titled ‘blogroll’ section”, but he doesn’t appear to understand what a blogroll is. Look, I’ve got a blogroll. It’s a roll of blogs, so that’s why it’s called a blogroll. It lists some blogs I quite like. But the people who write those blogs aren’t writing regular blogs for Cultural Snow. They’re doing it for themselves. And if Annie Bookcrossing suddenly declares that all Paraguayans should be drowned at birth, or Blackwatertown suggests that punching baby pandas in the face is fun, that’s not my problem, OK? Atkinson offers his view of the whole thing here.

OK, so Paul Scott is a silly old fart who doesn’t understand how social media works. Big deal. But the problem is, he’s writing for the Mail, which operates the most-visited news website in the world. Millions of people are (apparently) gulping down their tales of minor celebrities and their bikini malfunctions, and how Katie Holmes ate an ice cream so she’s probably OK now. Columnists such as Peter Hitchens, Melanie Phillips and Simon Heffer meanwhile bellow about the increasing banality and shallowness of modern culture, ignoring the fact that said banality is helping to pay their wages; the exquisite doublethink is neatly dissected here. But maybe they’re just like Scott, and still haven’t got to grips with how this big, strange interwebby thing really works. Maybe none of the Mail journalists really understand, and neither do the editors or the owners, and they’re all just helpless little hamsters in an Escher-like continuum of interconnected wheels that’s been thrown together for a giggle by some malevolent HAL 9000-type computer that turns out to be the cyborg love child of Mary Whitehouse and Paul Raymond. And as they die of exhaustion and embarrassment and self-loathing, the last thing they hear will be the voice of Carole Middleton explaining what a blogroll is.
Posted by Tim F at 11:39 am

I would never let anyone on my blogroll get away with an outrageous post. If a polite request to amend the post proved ineffective, I would threaten to hoist them upside down by their ankles.

So does that make you tweeter of blogger of blogroll of mother of woman with nice arse?

I love the "tackily titled blogroll section"! He assumes it's for wiping his arse I suppose.

Are you seriously telling me that Paul (who makes me swoon when I hear him on 'You and Yours") is a fan of punching baby pandas in the face ?

I may even report this misdemeanor to the Daily Mail !!

That a horrifically snide bit of penmanship. Why can't we all just be friends?

That said, I am a voracious reader of the Mail's website, but only to see Posh Spice looking miserable or Carole Vorderman turning up for an event, that sort of thing.

Thanks for outing me as a panda puncher. Thanks a lot mate.

But before everyone gets all aww poor pandas. How do you think they get that cute dark eyed look? Not from eating, shooting and leaving, that's for sure. It's takes hard graft and punching from selfless animal lovers like me to get them rocketing up the cuteness stakes.

But what thanks do I get? Huh? Huh? Exactly. Nothing.

They just take advantage of me and dump all the unwanted panda cubs on me. Yeah yeah - all that stuff about them never having sex and difficult conception is all rubbish - designed to rack up their scarcity value. My spare room is stuffed full of the wee buggers. I have to keep telling the neighbours that they're overweight racoons when I take them for a walk.

The little blighters keep mistaking the pampas grass at the swingers' house next door for bamboo. Now I'm getting complaints that my far racoons are hurting next door's sex life.

See what I mean? If you had to actually spend time with pandas - especially baby pandas - you'd punch them too.

Yes, but you're a gorilla. It's all in the wrists.

Except the Mail would never countenance the existence of such a practice, Rog.

I try my best, Scarlett.

Yes, Swazi. He really does.

Friendship is for girls and hippies, Sam.