Fifty Shades of Grey: taking your mind off the ironing

No, I haven’t read Fifty Shades of Grey, EL James’s mummy-porn blockbuster. The last time I made a conscious effort to read a book simply because people were arguing about how bad it was, I ended up creating a whole new blog about the bloody thing in a vain attempt to analyse the weird, compulsive appeal of its awfulness and I really don’t want to take another trip into that cul de sac of brain-sapping banality. 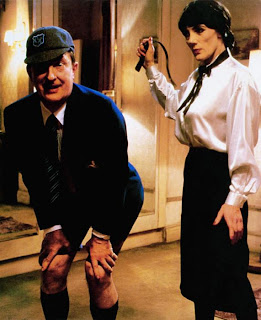 Not that I really need to read Fifty Shades to hold an opinion on it, because the debate has moved on beyond whether the book is any good or not, in literary terms at least. The word is that it’s reaching out beyond the main book-buying markets, luring previously reluctant readers into bookshops (real and virtual), reminding them that reading isn’t just something that other people do. And, goes the argument, if a small fraction of those converts go on to become regular book-buyers and/or book-readers, that can only be a good thing. It’s another matter whether the potential benefit of these eager new customers turns out to be enough to counteract the depressing reality that agents and editors will ignore for the next three years any author presuming to write anything other than monochrome-covered tomes oozing with female-friendly spanky smut. On the other hand, in the last decade it was all pubescent wizards, so at least this is something slightly different.

One thing that many observers have noted is the way Fifty Shades has divided its readers, with the number of 1- and 5-star reviews on Amazon dwarfing the middle ground. This is probably inevitable when so many people are reading it less in anticipation of pleasure and more to see what all the fuss is about; I guess Lolita or Lady Chatterley would have elicited a similar spread of reactions. The difference is of course that Nabokov and Lawrence were deemed to have written proper literature; EL James is writing for a mass market and her fans inhabit a broad demographic. A skim through those who gave her book full marks throws up the likes of:

I am not a fan of reading but all girls i work with are reading the triology and everyone rated it so i gave ib an actually bought all three at once (the only books i have bought in past are for uni. I started reading them on Saturday 2nd June and by the evening of the 5th /june i has finished the lot, i loved everey book and gutted that i have finished them, its true they are kinkier than expected but there is a story line behind it. I just hope the movie livesd up to the book when they decide on a cast :)

...which may simply reinforce the prejudices of Grey-haters, as well as giving some ammunition to those who bemoan the current state of higher education. More interesting is this comment:

I read with interest the reviews before buying. They seem to come from two angles. Those with their literary glasses on and those expecting a bit of escapism. Now I've read it the literary reviews seem laughable. Prose? Grammar? Syntax? This is simply a book that is meant to take your mind off the ironing and it certainly does that.

Rather than taking on the one-star haters, who criticise the clunky, repetitive style and the two-dimensional characters, the argument seems to be – to the above reviewer at least – that such niceties simply don’t matter. No, EL James is not Prince Nabokov, nor was meant to be. A book such as Fifty Shades of Grey is allowed to be poorly written from a strictly literary point of view, but can still succeed on its own terms, temporary displacement of domestic duties included. The real question is – and I asked this about The Da Vinci Code and never really came to a satisfactory conclusion – does it actually *have* to be badly written?

PS: And then there’s the brown sauce story.

PPS: And this is quite funny (with a tangential Fifty Shades mention at the end).

PPPS: And for more Amazon reviews that fart in the face of the critical consensus, go here.

PPPPS: And yet more – this absolute gem, flagged up by the lovely Broken Biro, makes me even more glad I never bothered to read the bloody book.

PPPPPS: But what’s this? A defence of the book, in the New Statesman no less.
Posted by Tim F at 6:36 am

I confess... I got it on the Kindle app (the 21st century equivalent of the brown paper bag) when so many people were coming into the library looking embarrassed and asking, very quietly, if we have it. (We do, but there's a waiting list as long as...).

I started it, but, oh dear... not nearly enough kink to distract me from its failings.

Of course it has to be badly written, in the same way that the unreality of reality TV makes compelling viewing.
The second reviewer sums it up neatly with the observation, "They seem to come from two angles."

Here is an absolutely revolting riff on the phenomenon:

Quite well written, though.

3. Financial destruction of men in divorce courts through alimony and support payments (women get up to 95 percent of their ex-husband's income and savings, as well as the house, car, etc)

4. Emotional destruction of men by ex-wives who have stolen their children from them and forbidden the fathers from having custody or contact with their own children

5. Divorced dads who commit suicide as a result

Not one single American woman has EVER condemned their fellow American women for committing these crimes against men. Silence means consent. Therefore, American women support and enjoy destroying men's lives and causing men to commit suicide. Apparently, American women think it is okay to be a criminal, just as long as you are a woman. Therefore, is it any surprise that a huge percent of American men no longer want anything to do with American women, other than using them for easy sex and then throwing them away?

Yes, am enjoying Ms Parkin's effort, BB. And she quotes so much of 50sog, we don't need to read it.

Maybe we hold it to higher standards, Martin, because it's a book. Unreasonable, maybe.

Blimey, Chris, Oor Wullie's changed since I was a lad.