Hitchens, Orwell, Lenin and the virtual slop-pail of fame 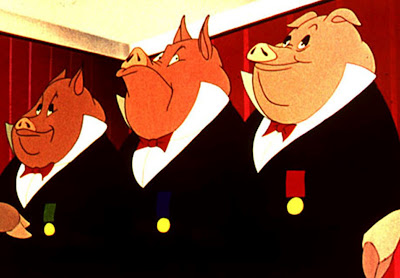 In his introduction to a 2010 edition of Animal Farm (also included in the almost-posthumous collection Arguably), Christopher Hitchens makes this observation on Orwell’s cast of characters and their equivalents in the Russian revolution:

There is, however, one very salient omission. There is a Stalin pig and a Trotsky pig, but no Lenin pig... Nobody appears to have pointed this out at the time (and if I may say so, nobody but myself has done so since; it took me years to notice what was staring me in the face).

Well I noticed when I first read it, probably around the age of 14 or 15, at the same time I was covering the revolution in my O-level history class. And I’m sure I pointed it out at the time, although I wouldn’t be surprised if none of my peers paid any attention. And I’d be astonished if thousands of people over the years hadn’t read the book and stroked their chins and thought, “Hang on...” Of course, that’s not what Hitchens means. He means that nobody within his golden circle pointed it out, nobody with whom he was at Oxford, nobody who wrote for the New Statesman in the 70s or Vanity Fair in the 00s, nobody with whom he drank and smoke and roistered and even doistered. If I’d had a blog (OK, its analogue equivalent) back in the early 80s I might have raised the matter then, but I suspect even if I had it wouldn’t have come to his attention. Some writers, it would appear, are more equal than others.

Incidentally, if you key “animal farm” into google.co.uk the first site that comes up is an adventure park in Somerset, where you get to meet Peppa Pig. Maybe she’s Lenin.
Posted by Tim F at 9:04 am

Lenin does not appear in the works of Beatrix Potter either. Very shoddy.

Tim, Lenin is alive and well, and living at Paultons Family Theme Park. Certainly, there are vehicles there, offering a sort of uprising.

I thought there was a Lenin pig, whose ideas get twisted by the Stalin pig.

I was thinking about Animal Farm just today, oddly enough. About the pigs/men/men/pigs bit at the end, which works as a metaphor for what happens to all politicians, not just communists.

The 80's equivalent of a blog was a cub scouts diary and a pot of green Quink.

If Peppa Pig is Lenin (an idea that made me laugh out loud), who would be her revolutionary vanguard? Can we imagine Maisy as Rosa Luxemburg?

Speaking of Orwell, I do believe that Keep the Aspidistra Flying is a masterpiece of literature, unfairly marginalised because of the more obvious political messages of 1984 and Animal Farm

True, Vicus. But The Tale of Ho Chi Minh Hedgehog is still rather charming.

How can Peppa be in Somerset and the New Forest at the same time, Martin? One of them must be a fake. Unless...

Well I was having this conversation over on Fartbook, Annie. Some argue that Old Major is a conflation of Marx and Lenin; but he dies before the rebellion starts, so I think he's far more Karl than V.I.

That was my problem, Rog. Never did Cubs.

I love Aspidistra as well, SM. A superb depiction of the slightly talented writer and his frustrations.

As a brilliantly intellectual 14 year old myself - I considered Snowball to Leninish as well as Trotskyish. I mean, how many pigs does a small farm need? Let's not get out of the realms of reality in husbandry in this Fairy Story. And if you want Lenin, then Bukharin, Zinoviev, etc... where are they?

You know, it wasn't meant to be an historical retelling of the Russian revolution only, was it? I read it as an allegory of the expected path of events in the corruption of all revolutions and I got a 9/10, hey.

Hitchens would be Trotsky in Amis's world. Discuss.

I must admit, the allegorical side of Animal Farm has always been lost on me. I can only read as a foretelling of Babe.

Swallows and Amazons however, with characters such as Roger, Nancy and Titty, well that always seems blatant to me, although my English teacher did not agree with my interpretation.