I very rarely find myself in an “I-wish-I’d-had-a-camera” moment because I’m hopeless at taking pictures and in any case deep within my DNA I think there’s a little bit of that superstition (Amish? Inca? Nepalese? Can never remember...) that capturing someone’s image is a way of grabbing their soul. And I’m really rather shy, so I could never do that thing of stopping perfect strangers on the street and asking to photograph their groovy clothes; and I’m also very wary of confrontation, so I could never risk taking pictures surreptitiously, in case the subject objected. No, words is what I do, which is why I was massively tempted to turn the end of that last sentence into a pun about word order, by inserting the word “verb” but I didn’t, so hurrah for me.

But anyway, on Saturday night, in the gift shop of a posh hotel in Bangkok, I wished I’d had a camera. A youngish couple walked in; from what I could hear of their conversation I think they were Korean. He was wearing a blue-and-white striped polo shirt and on the right breast was Magritte’s pipe. Oh, you know the one: 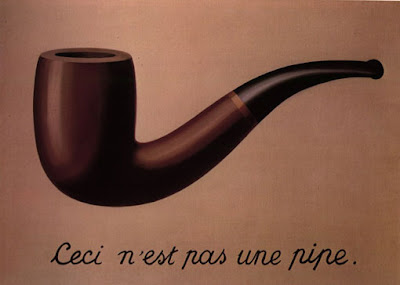 That’s the chap. Except he just had the pipe – not the words. The words that seem to be a lie and then you suddenly realise they’re telling the truth, because it’s not a pipe, it’s a picture of a pipe. The words that encapsulate Magritte’s dry, self-deprecating, deliciously Belgian wit; the words that brought metafiction to visual art; the words that make you look at all art before or since through different eyes; the words without which it would still be a pipe, because nobody’s telling you otherwise. But I didn’t take a photo, for all the reasons I mentioned.

And because I don’t know the Korean for “Do you mind if I take your photo for my new website youvecompletelymissedthebloodypoint.tumblr.com?”
Posted by Tim F at 9:28 am