Not about Michael Jackson

Michael Jackson fans, we are told, are annoyed that a forthcoming Quincy Jones concert appears to have shifted its emphasis from being a tribute to the King of Pop, to a non-specific trawl through music from the 80s, with occasional nods to Jacko.

But what’s more interesting is that the posthumously disgraced Jackson himself barely seemed to figure, even in the original marketing. Sure, there was plenty of emphasis on his three most important albums (all of which Jones produced) but his tarnished name is conspicuous by its absence. Which is, I guess, a way to get around the whole problem of how to appreciate Great Art By Bad Men; we are allowed once again to appreciate a sculpture by Eric Gill, a film by Roman Polanski, an album by Michael Jackson, without any moral awkwardness, simply by dropping the Bad Man’s name from the credits. I’m pretty sure that this is not what Barthes was thinking of when he posited the Death of the Author – but hey, he’s only the author anyway, so who cares? 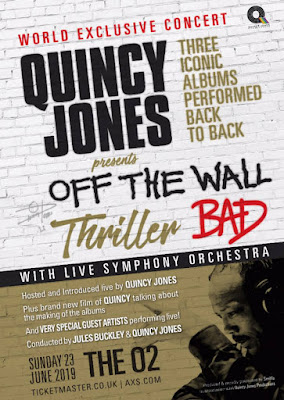 PS: And Judi Dench says much the same thing about the works of Harvey Weinstein and Kevin Spacey. And she’s a national treasure so it must be OK.

PPS: And on Twitter, the trauma that ensues when someone decides JK Rowling is A Bad Person.

PPPS: Nick Cave, who dealt with this a couple of months ago, returns.
Posted by Tim F at 8:06 am

Interesting that even the album titles are not exactly right either. Close stylistically, certainly close enough to trigger recognition and, I expect, the desired Pavlovian response. But not exactly right. Probably cheaper to use similar fonts than actual album artwork/typography.