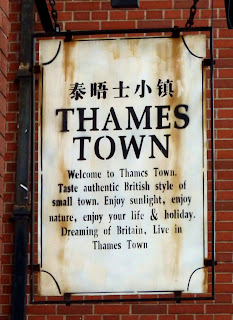 Westerners may mock the Chinese tendency to recreate manifestations of Western culture in their own back yard, but it’s a common trait of burgeoning empires that they need to demonstrate their global reach. Think of 18th-century British architects incorporating pineapples into their designs, to imply that their clients could afford such expensive delicacies; or a pseudo-oriental pastiche such as the Brighton Pavilion. But it’s still tempting to mock the earnest attempts to create a perfect simulacrum of some English utopia that probably never really existed in the first place; even the architect of Thames Town, on the outskirts of Shanghai, feels compelled to voice his misgivings:

It doesn’t look quite right. It looks false. The proportions are wrong. The use of the different stones is all wrong. It would never be used like that in the genuine English church...

But surely it’s that not-quite-rightness, that sense of close-but-no-cigar, that makes things special. A development such as Thames Town should be like an English village where the Doctor alights, takes in the sights, enjoys a nice pint and only then realises that the whole thing’s made of plastic and Sarah Jane’s been replaced by an android. And what is it that tips him off? It’s somebody saying something ever so slightly wrong such as:

I really hope I can visit the real Thames River one day, sit along the banks, drink a cup of coffee and enjoy the British sunshine.

Gawd bless 'em, it's really rather flattering, though probably due to watching to many Inspector Morse and Misdsummer Murders episode (featuring the river's upper reaches, chosen judiciously).

When I was TEFL teaching I nearly applied for a job in China in a Thames Town-like place. The idea was total immersion for the students. It would've been utterly weird, like living in a Mary Poppins set.

You're right, Gadjo. Always aspire to live somewhere with a high body count.

Fukushima has it's own version of this called British Hills. I went once back in 1997 I think it was, played a frame of snooker on what must be one of the only full-sized snooker tables in Japan. They had a pub and it all looked suitably Edwardian/Victorian/Shakespearean. I quite liked it, I was sad to leave!