Swastikas over Asia (and the royal baby, obviously)

A few months ago, walking down Sathorn Road, one of the poshest thoroughfares in Bangkok, I passed a young Thai man wearing a t-shirt. It bore a swastika, the name and image of George Lincoln Rockwell, founder and leader of the American Nazi Party, and the slogan “WHITE POWER”. 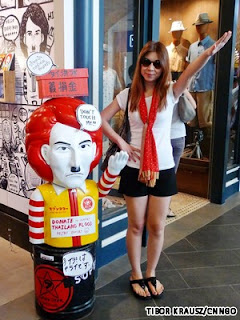 Of course, it’s very easy to read too much into such things. In Thailand and beyond I’ve often seen people sporting texts that they clearly don’t understand; my favourite was a septuagenarian lady whose shirt was emblazoned with a Pepsi logo tweaked to say “PENIS”. But that sort of occurrence prompts nothing more than sniggering condescension on the part of farang, aka gweilo, gaijin, etc; the same westerners, incidentally, who will happily (albeit ignorantly) acquire a Chinese tattoo that proclaims their own intellectual limitations. They’re less relaxed when they see a young Asian decked out in the imagery of the Third Reich. And sometimes they voice their disapproval. In recent years, various levels of brouhaha have been provoked by a school in northern Thailand staging a Nazi-themed parade; a billboard featuring Hitler at a graduation ceremony in Bangkok; Nazi cosplay in Japan and elsewhere; and restaurants in India, Korea, Thailand and most recently Indonesia appropriating a Nazi aesthetic to promote their wares.

So is Asia a time-bomb of neo-Nazi sympathies? No, but it’s not quite as simple as that. Certainly there are widely held and openly aired attitudes to racial difference that would make many good western liberals feel slightly nauseous; and in Muslim-majority countries such as Malaysia, anti-Jewish polemic is accepted as part of the political discourse. Moreover, the historical perspective on World War II and its outcomes is different from that generally held in Europe or North America. Countries such as Britain and France were colonial occupiers and the Indian independence campaigner Subhas Chandra Bose was certainly not the only one to favour a pragmatic alliance with the Axis powers as a means of securing self-determination. The concept of the Greater East Asian Co-Prosperity Sphere, which would supposedly have replaced the economic infrastuctures of the western empires had Japan prevailed, must have looked like an attractive alternative to being ordered around by some whey-faced product of Eton and Oxbridge. 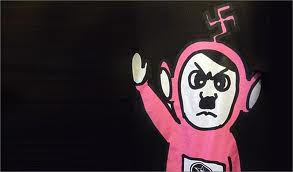 But for the majority of people who wear swastika t-shirts or carry cuddly Hitler dolls or perform Nazi salutes at inopportune moments, it’s nothing to do with wresting the historical narrative away from its Eurocentric perspective. It’s pure, honest-to-goodness ignorance, with a side-order of not giving a shit. When Sid Vicious or Siouxsie Sioux wore the hakenkreuz, it was a conscious decision to provoke and outrage. But Asian teens today know as little about der Führer as their counterparts in London or New York know of Chairman Mao, General Tojo or Pandit Nehru. Adolf’s just this funny-looking guy from the olden days who did this wacky thing with his arm and had a bad hipster haircut. And in some ways that’s even more disconcerting to a westerner than the thought that the kids might have absorbed his ideology. 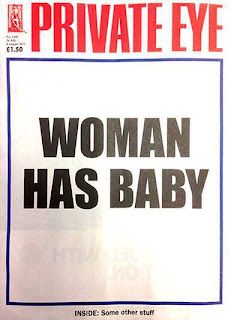 Which leads – no, bear with me for a moment – to the as-yet unnamed offspring of the Duke and Duchess of Cambridge. Now, I wish the child no particular ill; but I’m already thoroughly sick of the media’s obsession with his gestation, birth and now his existence. I suppose I shouldn’t be surprised that the likes of the Mail and Telegraph have gone batshit for this, but I couldn’t find any respite from the coverage on Radio 4. The next time someone bleats about the left-wing bias of the BBC, ask them why they couldn’t dredge up a single republican voice to counter the sentimental wittering. Not that I’m a particularly trenchant anti-monarchist; to me, it’s just another manifestation of tacky celebrity culture, which other people are more than welcome to enjoy but I get annoyed if it impinges on my own consciousness too much and too often. However, even the expression of this state of disgruntled apathy is too much for some of the starry-eyed supplicants; “If you really don’t care, why are you going on about it so much?” seems to be a consistent refrain on social media when commentators such as Brian Reade and Andrew Collins articulate the extent of their apathy. Well, why shouldn’t they? Why does it perturb you so? Possibly because you know that the British monarchy will never succumb to the threat of pitchforks and guillotines because that’s not the way we do things; but not caring one way or another is a psychological weapon with its own special potency.

I like reading your blog but your banner picture makes me feel sick. Could you revert to images of stylish vintage folk?

I'm afraid you'd find no respite in Canada. The top story on the CBC website: Kate at the Crossroads, the Dilemma of the Royal Mum. If that didn't induce sympathy, there's the subheadline: There is also the Diana comparison to wrestle with.

The CBC, funded by the taxpayer.

Mmm, it's weird, but much, much more palatable. Thanks for taking notice of your readership's sensibilities. ( Or, perhaps you were just due a change? )

Your banner image cheers me up no end. Probably in my top five favourite films!

Brian: I used to know the founding president of the Monarchist League of Canada. I know you guys can do this thing pretty seriously.

The customer is always right, dear Sunshine. Although Mr Roland will tell you, when you put it into context, that scene is considerably more disturbing than a homunculus in a belly button...

I don't know if I'm horrified or amused! How can they honestly not know?

Disturbing I can ( sometimes ) handle - it's nauseating I have problems with. Could you please let me in on the film reference & the image's context?

They're not taught it in school, M, and it's not much covered in mass media. It's a question of perspective; how much does the average Western student today know about the Nanking massacre or the Khmer Rouge?

Hi, Sunshine. It's from the Coen Brothers' 1991 movie Barton Fink. It's the climactic fire that takes place in the hotel where Fink (an unhappy Hollywood writer) and Charlie (an insurance salesman, the figure in the picture) have been living. Don't really want to give much more away...