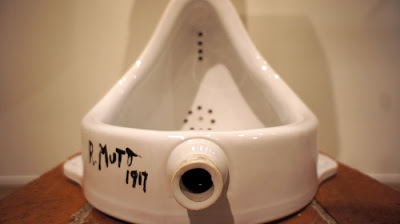 Does it matter? Since Duchamp’s appeal is all about provocative, incongruous ideas rather than fine craftsmanship, should it bother us that some of the pieces we view might never have been touched by the hands of the man to whom they’re credited? It’s the idea that matters, right? Well, yes, and after a century there are still people who are challenged by the idea of encountering a urinal in an art gallery. But ultimately, if the idea is so much bigger than the execution, why go to the bother of remaking a readymade? Why not just write down the idea on a PostIt note and put that in a gallery? But then Ulf Linde might copy the PostIt...
Posted by Tim F at 9:27 am