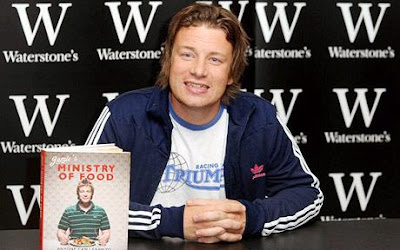 Many people object to literary theories such as Barthes’s Death of the Author, or Wimsatt and Beardsley’s Intentional Fallacy, which argue that conventional criticism pays too much heed to what a writer means to convey; the notion that a work is effectively written and rewritten by each successive reader is just a step too far into postmodernism. Dickens wrote Nicholas Nickleby and we read the same Nicholas Nickleby and that’s all there is to it. But the same people seem pretty relaxed about the notion that Jamie Oliver or Katie Price or Victoria Beckham can claim some kind of responsibility for a book in which their involvement was distinctly meagre. The name on the front is simply a brand, bestowing a sort of integrity upon the product; it must be good because that nice Jamie Oliver off of the telly says it is. But how can Oliver transfer any of his chirpy, heart-on-sleeve, pukka integrity malarkey, easy tiger, to a book if he doesn’t even know what’s in it?
Posted by Tim F at 7:59 am

If people are mistaking Jamie Oliver up with the Martin Amises of the world then they can take what they get. His restaurants are a different matter. Anyone know how often he shows his mug round Shepherd's Bush or the like?

Well, by all accounts Homer couldn't read the Odyssey or the Iliad either. Did Henry James read the novels he dictated toa secretary?

I like and respect him (though he is a bit overexposed and it was getting ridiculous in the height of his popularity) but when he says he doesn't read it makes me want to punch him.

Dyslexia is no good reason for not reading. For some reason a lot of my friends are dyslexic, they all had real trouble at school, and yet they are all interesting highly literate people who love a good book.

It's just ignorant to diss reading.