Jamie Reid’s 1977 image of the Queen has gone from iconoclastic to iconic and back again; inevitably for the work of an old Situationist, it’s been détourned and/or recuperated more times than I’ve had hot safety pins. Here’s this morning’s edition of Spanish paper ABC: 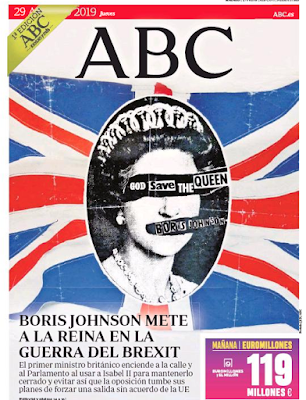 To be honest, I don’t know what the classic punk and/or Situationist position on Brexit would have been; probably squatting in the middle, lobbing paving slabs at both sides. John(ny) Rotten/Lydon has reinvented himself as a Faragiste but apparently hasn’t always been that way inclined. And this article by Padraig Reidy (which also hijacks the essence of that 1977 image) points out how the “potential H-bomb” has been reclaimed as an emblem of hope against Brexit by her mortal foes, the liberal chattering classes. It’s another flavour of détournement, I suppose, but a polite one.

Also, not big, not clever from Mark Thomas, but funny:


I know we have to coordinate and organise to fight a no deal Brexit but it can’t hurt to pray for a well timed intervention in the form of an autoerotic accident.
— Mark Thomas (@markthomasinfo) August 29, 2019


PS: Coincidentally, someone has catalogued a letter I wrote to Select magazine (gulp) a quarter of a century ago.
Posted by Tim F at 11:42 am