At the Musée d’Orsay a few days ago, the performance artist Deborah de Robertis further blurred the lines between performance, art, criticism, gender politics and self-marketing by re-enacting Origin of the World in front of the original painting. Which, if you’re not aware of Courbet’s controversial masterpiece, essentially means displaying her ladyparts to all and sundry.

There is a gap in art history, the absent point of view of the object of the gaze. In his realist painting, the painter shows the open legs, but the vagina remains closed. He does not reveal the hole, that is to say, the eye. I am not showing my vagina, but I am revealing what we do not see in the painting, the eye of the vagina, the black hole, this concealed eye, this chasm, which, beyond the flesh, refers to infinity, to the origin of the origin.

...which is essentially a riff on the feminist argument that in too much art, the male gaze at once sexualises the female body and makes it passive. Fair enough. But the stunt (cunning or otherwise) also refers back to the questions raised by René Magritte 85 years ago when he forced us to contemplate the distinction between a real object and a painting thereof. If it’s OK to show a painting of female genitalia, de Robertis seems to ask, why is it so disturbing — not least for the museum authorities — to show the real thing? When we get to media coverage of the event we get beyond reality top the competing claims of different kinds of representation. After all, unless we happened to be present when she sat down in the museum, we don’t see de Robertis’s genitalia, only photographic representations of it — just as we only see Courbet’s rendering in oils of his anonymous subject’s pudenda.

Said media tend to play things safe. In the Artnet article, the Courbet painting is shown in all its glory; Ms de Robertis’s tender areas are blotted out (is this the black hole to which she refers?); but there’s a link to a video in which all is bared and you can also see the upset that resulted. A brouhaha about a hoo-ha, one could say. When Le Figaro covered the same story they were even more puritanical, not even showing the original painting; but in the photo they used an attendant’s leg protects the artist’s modesty, thus making the act of censorship feel slightly less crass. (Indeed, that image rather reminds me of the classic photo of the Twickenham streaker Michael O’Brien, in which a London bobby’s helmet shields us from his, um, helmet.) When the Daily Mail ran a different story relating to Courbet’s painting last year they were equally wary of showing it in all its glory but felt able to offer up a rough sketch: which suggests that its readers can cope with neither female genitalia nor paintings of female genitalia but half-assed doodles of female genitalia are OK.

But let’s go back to de Robertis’s original point, which is essentially about how artists use and abuse female nudity. She’s reasserting her claim to ownership of her body, so the depiction of a naked woman is OK if it’s the woman herself doing it. Context is all. But she may well have been making a feminist statement when she sat down but if you wait till the end of the video clip and go to some of the suggested viewing, you’ll find that some of those who appreciated the ideological intent behind her gesture also wanted to see attractive Italian ladies in their underwear and a story about Scarlett Johansson getting naked. In today’s infinitely connected world, context begins to die after a single click.

Which puts me in a spot: how can I illustrate this story without seeming to be a prim, censorious puritan on one hand or a leering pornographer on the other. I suppose I’ll just avoid the issue, with a pretty picture of a cat, albeit one involving an artist who raised similar questions about the points at which empowerment and titillation intersect. Will this do? 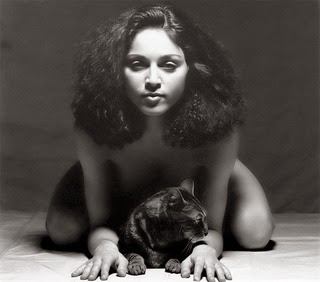 We have a long way to go, Tim. Personally, I think the young artist deserved a much more generous round of applause.

Dude, it's acon job. There was no art to it. Maybe a bit of daring, but given the nature of 'french' art, it might get her a fine. its that whole thing that's farcical. for one there's no art involved. Courbet was a great artist, no matter his views on holes, cunt, or pussy. Shes a smart chick, good looking and is bound to get herself a good little grant or two after forcing her shit on everyone. Cunts like that with their sweet asses have always been the hangers on of art. A truly daring artist putting herself in harm's way did much braver things way back in the 70's when Poland was run by the heavy duty state of socialism... that took balls, to go and out and do readings of her own work bare ass naked. Ewa Partum. Fuck de Robertis, she's a flasher.

True, Rod. Ticker tape would have been a nice touch.

Anon, are you Brian Sewell in disguise?