Gustave Courbet and the bits of a woman 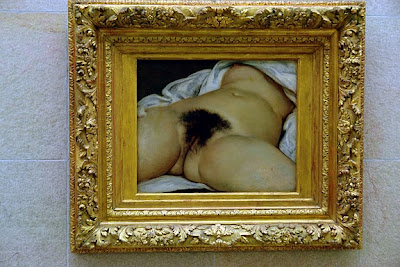 A painting found in a Paris junk shop now turns out to be the missing head section of Gustave Courbet’s The Origin of the World. The Daily Mail covers the story but finds itself unable to publish the better known bottom half of the picture, although it does make a passing reference to “female genitalia” and includes a rough, unattributed sketch that could indeed be intended as a depiction a lady’s down-belows but might equally be a head of broccoli, or maybe a map of Austria.

I’m not sure whether the Mail’s reticence is down to squeamishness over the depiction of women’s naughty bits per se, or the fact that Courbet’s subject is rather unkempt by modern standards. I recently had to explain to some younger colleagues what a merkin was and they were baffled that anyone might want to add hair to that particular area; theirs is a world of scrupulous waxing and they can conceive of no other. Ultimately I think it’s just that pervasive cognitive dissonance about the female body; mass media drools over it and is repulsed by it at once. On a similar theme, I did rather like the advice given to those attending this year’s Grammy Awards:

Please avoid exposing bare fleshy under curves of the buttocks and buttock crack... Bare sides or under curvature of the breasts is also problematic. Please avoid sheer see-through clothing that could possibly expose female breast nipples.

The other thing I find intriguing is that a picture depicting one part of the human body should necessarily have one or more sibling paintings that can be put together to form a whole. Does this mean that somewhere in the world there’s an image of the Mona Lisa’s front bottom; or perhaps the Laughing Cavalier’s equally chucklesome meat and two veg? I wonder how the Daily Mail might report such a find?
Posted by Tim F at 8:50 am

Is it me, or is £1,200 quite a lot of money to splash out for a painting found in a junkshop? The local British Heart Foundation usually prices them around a fiver.