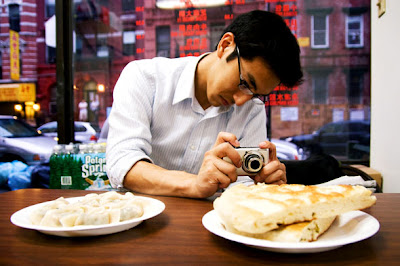 I don’t actually have a principled objection to people taking pictures of their food: that said, it can be annoying when they insist on taking pictures of my food as well and won’t let me start eating it until they’ve snapped it from five different angles.

What worries me, however, is what such ad hoc snapping replaces. Instagram and Tumblr are quintessential media for our post-literate age, in that they do away with the need for all that pesky writing and spelling and syntax stuff that seemed so vital in the days when blogging looked like the future (see the second quote here). But they also ensure that people can document their various realities without engaging in any kind of critical thinking. Clearly one’s choice of subject implies a certain level of discrimination, but ultimately the burden of analysis is placed on the person viewing the photo, and that’s often based on something other than the quality of the picture or even the specific content. We respond differently to someone photographing a meal at The Fat Duck than to someone doing the same thing at Nando’s. I’ve seen people photographing their frappucinos; am I entitled to have a critical response towards such a phenomenon? If photographers don’t explicitly review the food, we fill the gap by reviewing the photographers. Ultimately it’s all about them; see the tumblr Pictures of Hipsters Taking Pictures of Food.

I’m in the middle of Steven Poole’s You Aren’t What You Eat: Fed Up With Gastroculture, in which he excoriates the drooling excesses of chefs, critics and foodies. It’s an entertaining read and he makes many good points about the daft ways in which food has been raised to the level of art or sex. But ultimately, if we worry too much about the risk of hyperbole when writing about food – or about anything – we may as well just put down “And then I had gazpacho and then I had lamb chops and then I had baked Alaska and it was all nice.” Or we might as well just take photos and not say or write or think anything at all. 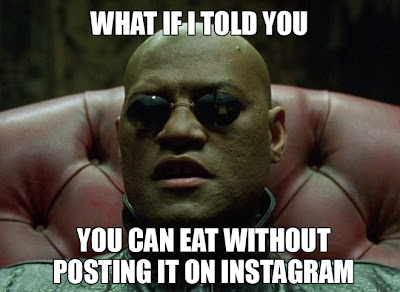 Eat with your aperture closed is my advice. Shutter, aperture, whatever.

(Why did the hipster burn her mouth? Because she was eating pizza before it was cool. -- Sorry, only heard that one last night.)

From my twisted and bitter viewpoint it all looks posting pictures of your* dick on facebook.
All these separate bubbles containing individuals who insist on wearing sheep's clothing.