And you thought funeral selfies were bad?

The latest eruption of moral why-oh-whyery to transfix the interwebs has been prompted by the Tumblr Selfies at Funerals, which does pretty much what it says in the title; young people trying to make a solemn occasion all about them. Could there be a more apt symbol of the corruption of modern society?

Once again, plucky Thailand rises to the challenge. On Monday three bomb disposal officers were killed in the restive south of the country and when the bodies were brought into the hospital, a couple of nurses decided to mark the occasion thus: 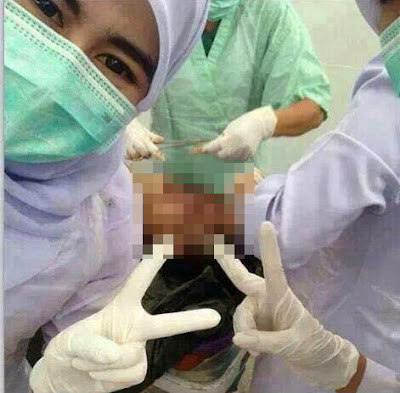 Ew! Can you imagine the selfies from Lou Reed's funeral? Would he be offended or amused?