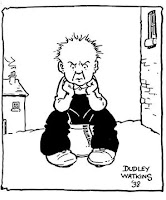 If you happen to be in Scotland or thereabouts today, do pick up a copy of the Sunday Post, which appears to have betrayed its self-description as “a thoroughly decent read” by finding space for yet more of my chinstrokes about the soon-to-be-gone decade.

However, my quest for absolute domination of the day’s media has been derailed by the last-minute decision not to include my contributions in this evening’s The Greatest TV Shows of the Noughties on Channel 4. The best I can offer is to use this space as a sort of DVD Extras section for the show, to give you a flavour of what you won’t be enjoying tonight. First I suggested, quite reasonably I thought, that the snivelling BGT moppet Hollie Steel simply proved my contention that the true hero of the Nativity story was Herod. At that point, producer Sean (a very nice man, by the way) stopped me in my tracks; not because I’d casually advocated the murder of a 10-year-old girl, but because some of the viewers might not know who Herod was.

Then, while discussing the success of QI, I made some mild jibe at Stephen Fry (I think I repeated the line about his being a stupid person’s idea of what a clever person looks like) at which point Sean again brought proceedings to a halt and explained that they were trying to get St Stephen to do the voiceover, so it might make things a bit sticky if I said that.

In the event, they had neither Fry nor me. I’m not sure who the talking heads will be, but the tweeting polymath’s replacement is ubiquitous fat lad James Corden. Not that I’m bitter or anything, I’ll just quote the closing lines from Brian Logan’s review of Horne and Corden’s stage appearance in March:

There’s no spark, no dynamic relationship between the two to generate tension or comedy. Nor is there sensitivity, warmth – or the sense of one's own ridiculousness from which comedy springs. Their final sketch, in which two frilly magicians flounce around, performing crap tricks to a bombastic soundtrack, suggests they can’t even make basic silliness funny. “Everybody is going down on you,” sing their Young People’s Church alter egos, with forced innuendo. But it’s Horne and Corden who are going down – and fast. Surely they can’t sink further.

Oh dear. No justice, is there?

Thirty years ago and more we used to see the Sunday Post every Monday, when the next door neighbour brought it round. I think you would have scripted compelling voice-overs for The Queries Man (a Dudley Watkins-style bloke with a pipe) or the breakdown truck operator from Calvine, who seemed to have a weekly spot. This is all I remember about it.

Apart from the Broons, of course.

As a protest, I'm never watching TV again, I'm burning my copy of The History Boys, and that Stephen Fry's moving out of my bedsit by the end of the day.

Christopher: One can usually find a few scrunched up copies of it at King's Cross until midweek. (And it's the KC branch of WH Smith of course that has 90% of London's Oor Wullie and The Broons albums.) South of Manchester, we had to settle for The Weekly News, which is the same thing, with less fiscal prudence.

I think Stephen Fry's clever. His humour goes over my head.

Blimey! Badmouthing St Stephen of King's Lynn Tech was tantamount to pressing the "abort" button at which point the trapdoor opens. We suspect "Kingdom" won't be going down as one of the highlights of the Noughties.

I'm with Fat Roland, and will seriously consider never having anything to do with any newspaper, magazine, TV channel or website that accommodates Fry ever again. Right. Loads more time for doing the laundry.
I do love your Herod story though. (Very seasonal.)

Worse even than the preposterous Danny Dyer, Geoff? Harsh.

I'm a great fan of His Stephenness, Rog. I merely pointed out that Alan Davies's performance on QI is its secret ingredient.

Oh do stop this Fry-biffing, BWT. It's not as if he's Tony Slattery or anything, is it?

I stick to the 'Peoples Friend' because it has edifying stories about love in the Glens and there are helpful recipes and knitting patterns.

The Broons and Oor Wullie are just are just pure mingin' filth.

Stephen is a walking deviated septum with a posh voice and is a manic depressive theiving poof to boot.

It's no wonder Mrs Mac Clean refuses to publish his letters to the 'Friend'.

I am surrounded by Broons annuals. I would live no other way.