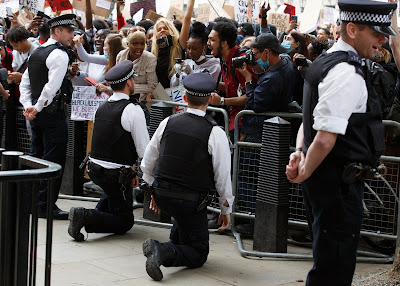 The new Home Secretary, Suella Braverman, has told police they’ve been spending too much time on symbolic gestures and, oddly enough, I agree with her. I was pretty sceptical about the whole taking the knee business, not so much because of what it represents, but because any such action or display that becomes an expected behaviour – to the extent that you draw more attention to yourself by not doing it than by taking part – loses any kind of moral authority. On the other hand, I extend my scepticism to Remembrance poppies, standing for the national anthem and the recently concluded near-fortnight of choreographed deference to mark the death of the Queen. I wonder whether the police will be encouraged to spurn that sort of symbolism.

PS: Good Lord, I was blathering on about this 15 years ago. The slightly awkward example I used was that if a German wore a swastika in the 1920s, he was definitely a Nazi. If he wore one after 1933, all you could be certain of was that he was keen to be seen as a Nazi.

We were all blathering on 15 years ago.